A round after upsetting 10th seed Karen Khachanov, Sydneysider Jordan Thompson beats No.24 seed Grigor Dimitrov to join Nick Kyrgios in the last 16 in Miami. 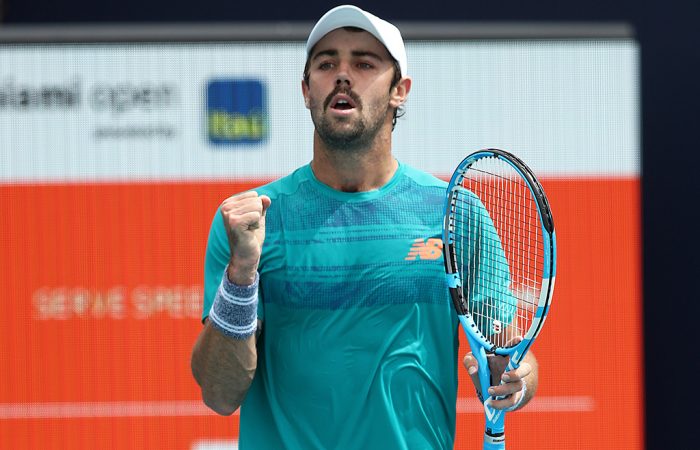 Jordan Thompson’s breakthrough campaign at the Miami Open has continued, with the Australian reaching the fourth round following a straight-sets win over Grigor Dimitrov.

“It’s huge,” Thompson told atptour.com. “Last year I spent a lot of time on the ATP Challenger Tour. I didn’t hear the end of that I only won one match (at tour-level) last year, so it’s nice to be in a fourth round of a Masters.

He joins countryman Nick Kyrgios in the fourth round; a night earlier, Kyrgios brushed Dusan Lajovic aside in a third-round match lasting less than an hour.

Ash Barty also won on Monday, with the Aussie 12th seed beating Kiki Bertens in three sets to advance to the quarterfinals.

Thompson’s win over Dimitrov followed his stunning 6-2 6-3 upset of 10th seed Karen Khachanov in the second round.

Notably, Thompson trailed Cameron Norrie 6-4 2-0 in the first round and came within two points of defeat in the second-set tiebreak before running out a three-set winner.

Dimitrov had not played a tournament since the Australian Open due to a shoulder injury, but appeared to rediscover his form quickly when he routed Feliciano Lopez in his opening match in Miami.

He also broke in the very first game of the match against Thompson, and served for the second set leading 5-4, but could not subdue Thompson, who completed victory in one hour and 47 minutes.

“Today I made a lot of returns,” Thompson told SEN’s The First Serve. “He was serving 120-plus and I was managing to block them back and get myself in the point, and settle myself in the match.”

Great touch at the net, consistency from the baseline, and impressive grit after losing a 3-1 30-0 lead in the second.

Has also beaten Norrie and Khachanov.