Ash Barty scores her first victory over Petra Kvitova to advance to the semifinals of the Miami Open - and guarantee her ascent into the world's top 10. 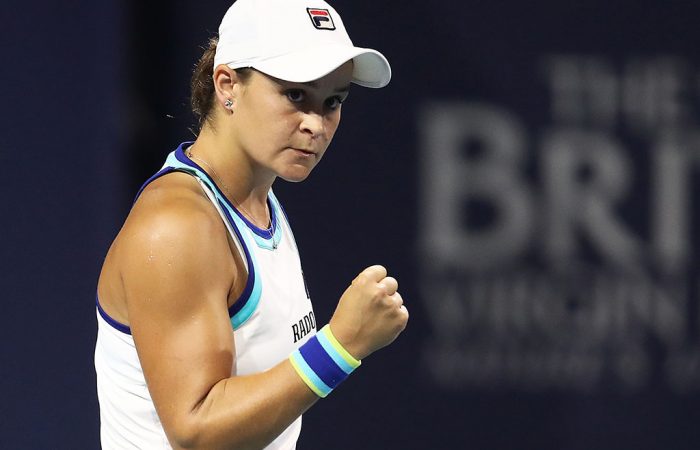 For the first time in five meetings, Ash Barty has scored a victory over two-time Wimbledon champion Petra Kvitova.

Her reward? A place in the Miami Open semifinals – and in the WTA top 10.

The Australian outlasted the Czech 7-6(6) 3-6 6-2 in a late-night, rain-delayed meeting on Miami’s Stadium court, setting up a semifinal meeting with No.21 seed Anett Kontaveit.

The Estonian earlier in the day beat Hsieh Su-Wei.

“Petra’s someone I respect probably most on tour. She’s an absolutely champion, a lovely girl and has always made time for me, even since I was very young on the tour. So very much appreciate and love playing Petra every time – it’s always a pleasure,” Barty said during an on-court interview.

Already in 2019, Barty had lost to Kvitova in the Sydney International final – after winning the first set 6-1 and leading 3-0 in the third – and the Australian Open quarterfinals.

She said her game plan was clear from the moment she walked on court against the world No.2 in Miami.

“I knew that I had to try and take her serve away from her as much as possible. It’s one of her biggest weapons,” Barty said.

“I knew if I could get into a lot of her service games I can back myself in on serve. I thought we did that really well today, and really pleased.”

"I know exactly how I wanted to play the match, I just needed to get it on my racquet"@ashbar96 after sealing her @MiamiOpen quarterfinal over Kvitova pic.twitter.com/QF18bqLixW

After a rain delay of around two hours early in the first set, Barty arrived at set point in the 11th game, but Kvitova saved it with brave, aggressive play, part of a run that saw her win eight of the next 10 points to lead 5-2 in the ensuing tiebreak.

Yet the Aussie dug in, remaining patient in rallies and forcing errors from the left-hander to snatch the set – despite facing a set point herself at 5-6.

Kvitova quickly went ahead 3-0 in the second set, but Barty broke back in the fifth game and held a 40-15 lead in the next game to level scores at 3-3.

She couldn’t convert, and Kvitova raced through the latter stages of the set to send the match to a deciding stanza.

There, just as she did in the Sydney final, Barty moved ahead 3-0, having broken serve in the second game with a delightful running forehand lob winner.

Yet it would be the last game she would win.

“Yes and no (I was thinking about the Sydney final). I think those thoughts are always there. With fresh balls, Petra was able to take the ball on the rise and take it early and crunch a few (to close the gap early in the third set),” Barty reflected.

“I was really happy with the way I responded in that 3-2 game. Got myself back on track and good to go.”

“(I was just saying to myself at that point) to stay really clear with what I want to do. I know exactly how I wanted to play the match; I just needed to try and get it back on my racquet as much as possible.

“Petra can take it away from you very quickly, so it was about me trying to get into those first couple of points.”

Barty was far steadier in the final few games against Kvitova, who finished the match with 46 unforced errors – almost double Barty’s tally of 24.

The Australian next turns her attention to Kontaveit, whom she hasn’t faced since the final round of Wimbledon qualifying in 2014 – a match she lost in three sets.

“She’s having a hell of a week … she’s playing some great tennis,” Barty said.

“It’s a pretty fresh match I suppose; we haven’t hit together much, we have’t played each other for a long time. So I think we’ll go in and try to work out a game plan.”