Australia's Alexei Popyrin is aiming to progress to the fourth round at a Grand Slam tournament for the first time. 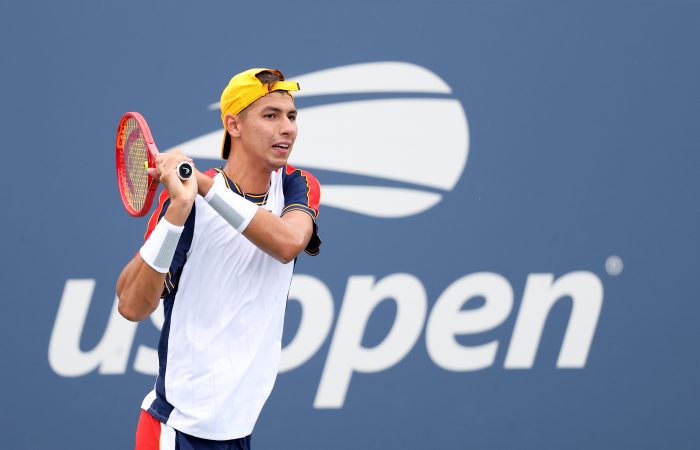 Alexei Popyrin is the last remaining Australian in the US Open 2021 men’s singles draw.

The 22-year-old has matched his career-best result by progressing to the third round and is now hoping to advance to the second week at a Grand Slam for the first time.

Popyrin is one of 14 Australians on an exciting day five schedule in New York.

Aussies in action on day five:

Alexei Popyrin (AUS) v [25] Dan Evans (GBR)
Men’s singles, third round, Court 17, second match (not before 2.30am AEST)
Popyrin has advanced to the third round at a Grand Slam tournament for the fourth time in his career – and now has his sights set on a first fourth round appearance. Standing in the 22-year-old Australian’s way is world No.28 Dan Evans – a 31-year-old Brit, who like Popyrin, has matched his career-best result in New York. Evans has only advanced to the fourth round at a major tournament once before, at Australian Open 2017. Popyrin produces his best tennis on the Grand Slam stage, as the world No.73’s record against seeded opponents demonstrates. He has won four of his 10 matches against a seeded player at this level, recording three of those wins at hard-court majors.
Head-to-head record: Evans leads 1-0
Last meeting: Evans won 6-4 6-4 (Queen’s Club 2021)

[16] Ellen Perez (AUS)/Kveta Peschke (CZE) v Greet Minnen (BEL)/Alison Van Uytvanck (BEL)
Women’s doubles, second round, Court 15, first match (from 3am AEST)
Since teaming up for the first time last month, 25-year-old Perez and former world No.1 Peschke have won six of their nine matches together. It ensures they carry plenty of positive momentum into this second-round match. World No.46 Perez is looking to match her career-best result in New York by reaching the third round. While her experienced 46-year-old partner, who is making her 13th second-round appearance at the tournament, is hoping to reach that stage for a ninth time. Their Belgian opponents are partners on and off the court, announcing their engagement earlier this year.

John Millman (AUS)/Thiago Monteiro (BRA) v [4] Rajeev Ram (USA)/Joe Salisbury (GBR)
Men’s doubles, second round, Court 6, second match
Millman has advanced to the second round in a US Open men’s doubles draw for the second time in his career – and for the first time since 2017. The 32-year-old Australian and 27-year-old Brazilian partner Monteiro, who made the Australian Open third round together earlier this year, face a tough test against the No.4 seeds and 2020 semifinalists. World No.6 Salisbury and world No.7 Ram have been one of the world’s most consistent teams for the past two years, winning the Australian Open in 2020 and claiming the Toronto title last month.

[14] Sam Stosur (AUS)/Zhang Shuai (CHN) v Miyu Kato (JPN)/Sabrina Santamaria (USA)
Women’s doubles, second round, Court 7, second match
Currently on a six-match winning streak, 37-year-old Stosur and 32-year-old Zhang have many reasons to feel confident. They recorded a commanding first-round win, riding the momentum from their Cincinnati title win last month. That result improved Stosur’s career record in US Open doubles matches to 31-12 and helped the world No.55 progress to the second round in New York for an 11th time. This gives the Australian Open 2019 champions a clear edge in experience in this second-round match-up. The 28-year-old Santamaria is ranked No.62, while 26-year-old Kato is the world No.79.

[10] Storm Sanders (AUS)/Caroline Dolehide (USA) v [WC] Lauren Davis (USA)/Ingrid Neel (USA)
Women’s doubles, first round, Court 6, third match
Sanders is currently Australia’s top-ranked woman in doubles at world No.41. The left-handed 27-year-old, who is playing with world No.26 Dolehide for the first time since their Wimbledon semifinal run, is making her second career appearance in a US Open doubles draw. After exiting in the first round in her 2020 debut, she is targeting a first win. The Australian-American combination, who have an 8-2 win-loss career record from their two previous tournaments together, face a wildcard pairing in the first round. This match, which was postponed due to rain, resumes with the No.10 seeds leading 2-1 in the first set.

James Duckworth (AUS)/Jordan Thompson (AUS) v [13] Rohan Bopanna (IND)/Ivan Dodig (CRO)
Men’s doubles, first round, Court 10, third match
All-Australian combination Duckworth and Thompson are determined to put disappointing singles exits behind them. This is 29-year-old Duckworth’s US Open doubles debut, while 27-year-old Thompson is competing for a third time. They have teamed up twice before in their professional careers – but not since Australian Open 2019. They face the experienced No.13 seeds in a tough opening-round match. The 36-year-old Dodig is ranked No.12 and won the Australian Open doubles title earlier this season, while 41-year-old Bopanna was a US Open finalist in 2010.

Max Purcell (AUS)/Matthew Ebden (AUS) v Hubert Hurkacz (POL)/Szymon Walkow (POL)
Men’s doubles, second round, Court 12, third match
Playing together for the first time, 23-year-old Purcell and 33-year-old Ebden combined seamlessly in an opening-round win. Looking to continue that form, world No.42-ranked Purcell and world No.69 Ebden face a Polish combination that stunned fifth seeds and US Open 2019 champions Juan-Sebastian Cabal and Robert Farah in the first round. The big-hitting Hurkacz is a top 20-ranked singles player – and the 24-year-old is also proving dangerous on the doubles court. Purcell and Ebden are both aiming to advance to the US Open third round for a first time.

Ajla Tomljanovic (AUS)/Andrea Petkovic (GER) v Anastasia Pavlyuchenkova (RUS)/Elena Rybakina (KAZ)
Women’s doubles, first round, Court 6, fourth match
Tomljanovic is enjoying a career-best singles run in New York. But today her focus is on doubles – where she is playing with 33-year-old German Petkovic, a former top-10 singles player, for the first time. Making her sixth appearance in a US Open doubles draw, the 28-year-old Australian has a 3-2 record in first-round matches in New York. They face a difficult opening-round match-up against Pavlyuchenkova and Rybakina. Not only are their opponents both top-20 singles players, but they also made the Roland Garros doubles quarterfinals together earlier this season.

Anastasia Rodionova (AUS)/Arina Rodionova (AUS) v Anhelina Kalinina (UKR)/Renata Voracova (CZE)
Women’s doubles, second round, Court 10, fourth match
The Rodionova sisters, who are contesting their first Grand Slam together since Wimbledon 2017, defeated the No.4 seeds in the opening round. It was only 39-year-old Anastasia’s second match in a return from maternity leave, while it was a career-first doubles win in New York for 31-year-old Arina. Determined to continue their winning run, they now play 24-year-old Kalinina and 37-year-old Voracova, who have both matched their career-best result in New York. Anastasia is aiming to advance to the US Open third round for a first time since 2014.

Storm Sanders (AUS)/Luke Saville (AUS) v Belinda Bencic (SUI)/Filip Polasek (SVK)
Mixed doubles, first round, Court 6, fifth match
Teaming up for the first time, world No.40 Sanders and world No.29 Saville are also making their US Open mixed doubles debuts. The Aussie pair, who are both 27 and live in Melbourne, have each achieved new career-high doubles rankings this season. As they look to achieve another major breakthrough, they face a highly-credentialled team. The 36-year-old Polasek is ranked No.14, while 24-year-old Bencic claimed an Olympic silver medal in doubles in Tokyo last month.

Zhang Shuai (CHN)/John Peers (AUS) v [1] Nicole Melichar-Martinez (USA)/Ivan Dodig (CRO)
Mixed doubles, first round, Court 10, fifth match
This is world No.25-ranked Peers’ sixth time contesting the US Open mixed doubles competition. The 33-year-old is partnering world No.27 Zhang again, who he made the semifinals in New York alongside in 2018. The duo also made the Wimbledon semifinals earlier this season and are competing in their ninth Grand Slam as a team. Their first assignment is the top-seeded combination Melichar-Martinez and Dodig, who are both ranked No.12 and are playing together for the first time.