Australian men continue their strong start to the 2021 season in Melbourne, with Alex Bolt, Alexei Popyrin and James Duckworth advancing to the third round. 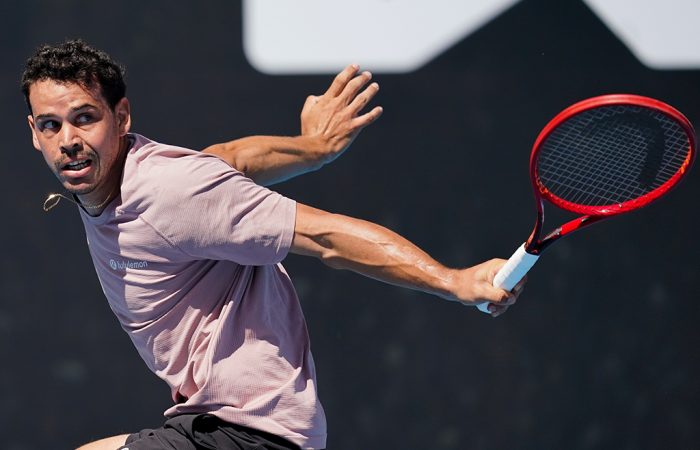 There’s a happy symbolism as Alex Bolt starts his 2021 season at the Murray River Open – a local of Murray Bridge on that very river in South Australia, he can’t help but sense the tournament is the perfect place to shine.

“Definitely, when I saw that (name) I thought that was pretty cool,” beamed the 28-year-old, soon after defeating Mackenzie McDonald to set up a third-round meeting with Stan Wawrinka.

“I mean it’s almost like a fairy-tale story, really, and hopefully I can keep the run going.”

So far that’s looking promising for the 174th-ranked Australian, who overcame his good friend Thanasi Kokkinakis in a hard-fought opening round and today survived another three-set match.

Taking just over two-and-a-half hours to claim the 6-4 6-7(7) 7-5 victory, Bolt needed to carefully channel his aggression to progress.

“Macky is a good player. I’ve played him a few times before. I knew it was always going to be a tough match. It had its ups and downs for both of us,” Bolt related.

“I think both of us were quite patchy throughout the whole match, but fortunate enough for me, I felt like I’d come out on top.”

After a tight second set came down to an evenly-matched tiebreak, which McDonald secured on his third set point, Bolt changed his approach.

“I felt like throughout the end of the second set and the start of the third set I started to get a bit passive and wasn’t playing to my strengths and using my weapons that I have,” said Bolt, whose 41 winners in total far outnumbered 24 from the American.

“I felt like towards the end of the third set there, I really started to back myself and really look for my forehand and take advantage of that.”

The Australian will next hope to take advantage in the third round against Wawrinka, the Murray River Open’s top seed.

“Stan, he’s a great of the game. He’s won Slams, he’s one of the best players in the world right now,” said Bolt. “I’m just looking forward to the opportunity to be able to play again.”

Alexei Popyrin is equally excited to return to the court, after contrasting victories in the opening two rounds.

Forced to save six match points against Borna Gojo on Tuesday, the 21-year-old had a far easier time against American Tommy Paul on Wednesday, taking 70 minutes to advance.

“I played really solid from all aspects of my game. I served really well, I was able to hit my forehand as well as I hoped. My backhand was really solid, and I was playing an aggressive game which yesterday I didn’t really do,” said Popyrin, after the 6-4 6-3 win.

A shift in mindset, the 21-year-old noted, also factored in his latest match.

“Going down six match points yesterday I think all the pressure has been relieved off me, so I’m now able to play freely and just to play my game and enjoy it out there. That’s what I did today,” he said.

It marked the world No.105 Australian’s first win over a top-50 opponent in more than four years.

“I knew it was going to be a tough match but I’ve been practising pretty well and was pretty confident in my game and obviously knew if I could continue to hold serve I could build pressure,” said Duckworth, who served eight aces and saved the lone break point he faced in the 95-minute match.

It was particularly pleasing that Duckworth could rely so heavily on his serve. After undergoing right shoulder surgery in the 2020 tour shutdown, the 29-year-old is at last feeling confidence in the biggest weapon in his game.

“I was on anti-inflammatories for a bit, sort of when I came back at US Open and French Open, I wasn’t quite sort of where I wanted to be in terms of my pace on serve,” he related.

“It gradually just got better and stronger and I’ve been pain free for a few months now.”

A sense of freedom also comes from the opportunity to simply compete in Melbourne.

“It’s such a privilege to be able to play this event and (I’m) really looking forward to my next match and (the) Aussie Open as well,” Duckworth said.

Each Australian continues with pride in each other’s success.

“It’s just great to see the Aussies doing well,” said Popyrin, who is contesting the doubles this week with Andrew Harris.