Seven Aussie men have progressed to the second round at the Murray River Open, with Nick Kyrgios, James Duckworth, Alexei Popyrin and Andrew Harris all scoring wins at Melbourne Park today. 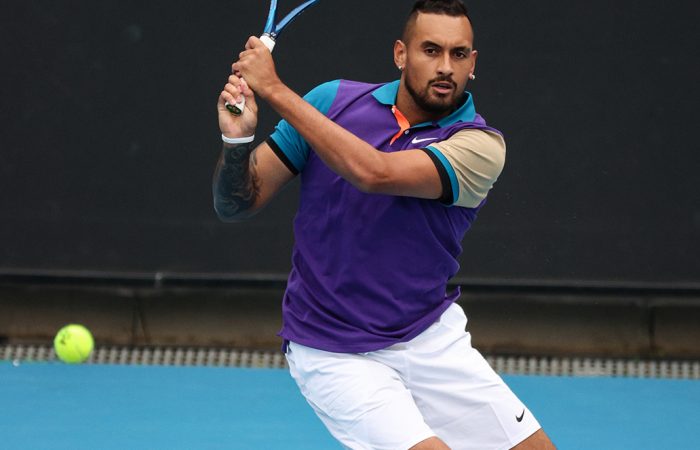 Australian men have continued their impressive start at the Murray River Open, with Nick Kyrgios, Alexei Popyrin, James Duckworth and Andrew Harris all advancing to the second round.

Kyrgios was tested in his first competitive match in more than 11 months, but held his nerve to record a 3-6 6-4 7-6(4) victory over France’s Alexandre Muller.

“It was actually a lot of fun. It was fun to be out there again and obviously good to win,” Kyrgios said.

His victory sets up an all-Australian second-round clash with Harry Bourchier tomorrow.

“We’re basically brothers,” Kyrgios said. “He’s a good player, big serve, and we know each other back to front.

“I’m just relieved it’s not someone that I don’t know again. It’s going to be a lot of fun. I’m just going to go out there, have a bit of fun.”

Duckworth made a solid start to his season, defeating No.197-ranked Czech Tomas Machac 6-3 6-4.

“There’s always nerves for the first match of the year, you’re not sure how you’re going to perform,” said the world No.105, who served nine aces and only lost nine service points for the match.

The 29-year-old described the importance of his first tour-level main draw win in almost 12 months as “massive”.

“I haven’t played for a while, so to be able to get a win and another match is great leading into the Aussie Open,” Duckworth said.

Seventh-seeded Frenchman Ugo Humbert awaits in the second round. It will be Duckworth’s first career meeting against the world No.32.

“He’s a great young player, a leftie with a big serve,” Duckworth said. “I watched a little bit of him towards the end of last year when we won a tour event in Antwerp and beat Demon (Alex de Minaur), so he’s obviously playing pretty well and likes playing on the hard courts. It’s going to be really tough, but I’m looking forward to it.”

Popyrin saved four match points in the second set against the world No.226 and another two in a tense third-set tiebreak, before closing out victory after two hours and 34 minutes on court.

“I think we both played a high level of tennis,” said the world No.114. “We both served, I think, unbelievably. When you get a guy like him serving 220 (km/h) and 75 per cent first serves in, it’s kind of hard to get breaks, to get opportunities on return. So I was just trying to focus on my serve, trying to focus on getting the ball in play on my return, and hopefully getting opportunities.”

The 26-year-old from Melbourne’s reward for his breakthrough win is a second-round meeting with second seed Grigor Dimitrov.