Harris, Popyrin, Kubler a win away from Wimbledon

Australians Andrew Harris, Alexei Popyrin and Jason Kubler win through to the final round of Wimbledon qualifying at Roehampton. 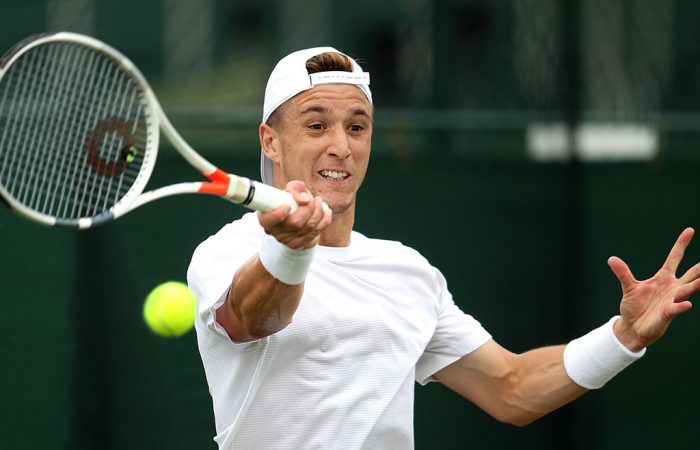 Andrew Harris recorded one of the biggest victories of his career on Wednesday, beating former world No.31 Sergiy Stakhovsky to advance to the final round of Wimbledon qualifying.

The Victorian rebounded to win 3-6 6-3 6-3, sending him through to the third round of a Grand Slam qualifying event for the first time.

There he joined fellow Australians Alexei Popyrin and Jason Kubler, who earlier in the day sealed their spots in the final round.

Popyrin, seeded fourth and playing in a Grand Slam qualifying event for the first time in his career, overcame a second set blip to run out a 6-1 3-6 6-1 winner over German Mats Moraing.

Kubler ended Slovak Norbert Gombos’ campaign with a 7-6(5) 7-6(1) win, a result extending his winning streak at Roehampton to five matches and sending him through to the final round of Wimbledon qualifying for the second year running.

In other results, Alex Bolt, Marc Polmans, Akira Santillan, James Duckworth and John-Patrick Smith all fell in their second-round matches.

Haris played aggressively and seemed to grow in confidence as the finish line drew closer, overwhelming Stakhovsky with his power, relentlessness and willingness to take charge of points, often at the net.

He broke the Ukrainian veteran in the final game and celebrated with a roar.

“He’s a pretty big name to be playing in qualifying. I knew Stakhovsky was going to be a really tough opponent; he’s proven that on grass over the years in his career,” said Harris of a player who became famous by dethroning Roger Federer on Centre Court in the second round of Wimbledon in 2013.

“I was a little nervous at the start of the first set but then once I relaxed and settled into the match I thought I played really well … I was surprised how comfortable I felt out there.”

Harris, climbing towards the world’s top 200, next faces qualifying No.1 seed Corentin Moutet in what will be a best-of-five-set match for a place in the main draw at Wimbledon.

“That’s two matches on grass in a row now against quality opponents,” he told tennis.com.au.

“Once I got going I started playing pretty well and I expect to play even better tomorrow. It’s a new match, and third match in a row.

Popyrin, the newest member of the world’s top 100, continued his impressive progress towards the main draw at the All England Club.

“It would be a dream come true, honestly. I think ever since I was a kid I’ve been dreaming to play the main draw of Wimbledon, so obviously getting in the hard way through qualifying would be a great achievement for me,” said the 19-year-old.

“It wasn’t a physical challenge (today), it was more mental just to recompose myself (after losing the second set) and get back into the match.

“On Monday I went through pretty comfortably I would say, so it was just to recompose myself and I think I did that pretty well today.”

Kubler, meanwhile, takes on Japan’s Yasutaka Uchiyama for a place in the main draw for the second straight year.

He recovered from 3-0 down in the second set and, after dropping the first point of the tiebreak that followed, stormed through seven points in a row to clinch victory.

“There’s confidence because I know I’ve done it before, but every day I’m probably going to play a little different to how I was before,” Kubler told tennis.com.au.

“I think one thing I’m very surprised with is that I’m serving very well. Almost as soon as I switched to the grass, my serve all of a sudden started clicking.

“So hopefully I can keep that going. Because last year I did well around this time and then went on a little run. So if I could do that again that’d be great, but I’ve got to get through tomorrow still.”

There was heartbreak for Santillan and Duckworth, who both held match points before going down in three draining sets.

Like Santillan and Duckworth, Smith also won the first set, yet eventually faded to a 3-6 6-3 6-4 defeat to 18th seed Salvatore Caruso.

Polmans fell 6-2 6-2 to No.24 seed Soon Woo Kwon of Korea, while Bolt – who qualified last year – lost 6-4 6-2 to Austria’s Denis Novak, a finalist on grass last week at the Ilkley Challenger.