Arina Rodionova will attempt to successfully qualify for the main draw at Wimbledon for the second time in three years on Thursday. 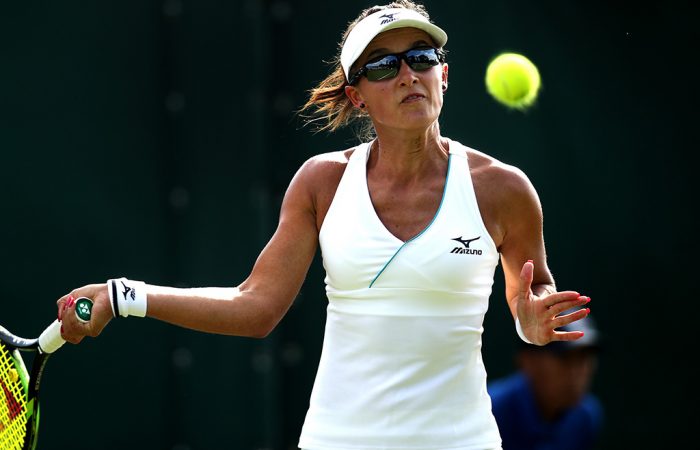 Arina Rodionova stormed into the final round of Wimbledon qualifying on Wednesday with a commanding performance against Misaki Doi.

Rodionova beat the fourth seed 6-4 6-2 in exactly one hour to reach the final round at Roehampton for the third time in her career.

RELATED: Harris, Popyrin, Kubler a win away from Wimbledon

Yet she showed few signs of a physical letdown as she dominated the Japanese left-hander on Roehampton’s televised show court.

“I actually think it helps that I played such a long match yesterday. I knew I probably don’t have enough energy to make another three-hour (match) … so I was really focused. And I was pretty relaxed,” she told tennis.com.au.

“I was really happy with my win yesterday so today I was like, let’s see how it goes and I’m gonna actually enjoy the moment, because I had no expectations really today.

“I was better than I thought I’d be (physically today). I woke up, had a few tight spots, but I saw physio before the match and I knew I’m gonna be fine to play.

“I wasn’t planning to do much running today (laughter).”

After surviving two break points in the second game of the match, Rodionova quickly assumed control, breaking Doi in the fifth game and maintaining her advantage for the remainder of the set.

In the second, the Australian went up a gear, barely missing a ball yet at the same time playing decisive, purposeful tennis to forge ahead 4-0.

Doi yesterday trailed Rodionova’s countrywoman Kimberly Birrell 4-0 in the third set of their first-round match. Rodionova was playing Muhammad on the next court at the same time, and admitted she was aware that Doi staged a remakable comeback.

She made sure there would be no repeat of that situation.

“I knew that she has an ability to come back from the score, like 4-0 in the third, so I was trying to be even extra aggressive when I was serving for it and I was up in the score,” Rodionova said.

“I really feel for Kim – it’s a very tough position to be in when you’re up and you just keep thinking about it. I’m wishing her to recover very quick from that one.”

Rodionova takes on American Danielle Lao – a player she has never before faced – for a spot in the main draw at Wimbledon for the second time in three years.

In 2017, she came through the qualifying rounds before saving seven match points to stun 16th seed Anastasia Pavlyuchenkova in the first round of the main draw.

“I like playing on these courts and I feel like home here in a way,” she said.

“I’ve played so many years here and obviously had some very good wins and some frustrating losses. I’m just really enjoying being here and I’m taking it one match at a time.

“Regardless of tomorrow it’s already a good week for me so I’m just going to enjoy the moment.”

At the same time Rodionova was playing, McPhee was engaged in a second-set slugfest with Liudmila Samsonova.

She led 4-3 in the tiebreak before the Russian belted two backhand winners and then a powerful first serve to win three straight points and arrive at match point.

Hon, seeded No.23, fell to American teenage rising star Caty McNally, who broke the Australian in the ninth game of both sets to serve out a 6-4 6-4 victory.