Nick Kyrgios and Alex de Minaur score wins on Tuesday to ensure eight Australians will appear in the US Open second round. 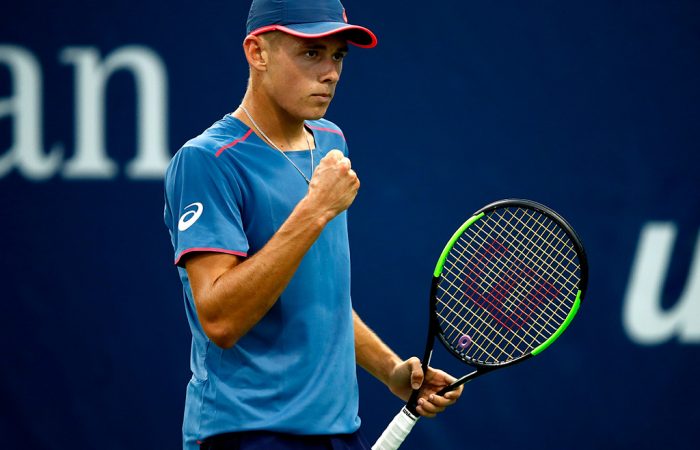 Alex de Minaur gave up just three games to Taro Daniel in a resounding first-round victory at the US Open on Tuesday.

“Those are the matches that I’m most proud of because it’s very hard in a five-set match to play at a very high level throughout the whole way without any lapses of concentration,” De Minaur said.

“That’s something I’ve really been working on and I’m very pleased to see it happening today.”

Nick Kyrgios was forced to work harder but joined his young countryman in the second round with a 7-5 2-6 6-4 6-2 win over world No.96 Radu Albot of Moldova.

Kyrgios next faces Frenchman Pierre-Hugues Herbert, who won their only previous meeting when Kyrgios retired during their first-round match at Wimbledon last year.

“So I’ve got to be on my game. But right now I’m just thinking about getting some dinner – I’m really hungry – and just chilling out a little bit.”

Victories for Kyrgios and De Minaur – the latter in a brisk 89 minutes – continued an encouraging tournament for Australia’s men, with John Millman and Matt Ebden also scoring victories on day two at Flushing Meadows. Jason Kubler won through to the second round on Monday.

In the women’s draw, Ajla Tomljanovic downed Lizette Cabrera in their all-Aussie clash to join compatriots Ash Barty and Daria Gavrilova in the round of 64.