Sam Stosur is beaten by world No.2 Caroline Wozniacki on a day of punishing heat at the US Open. 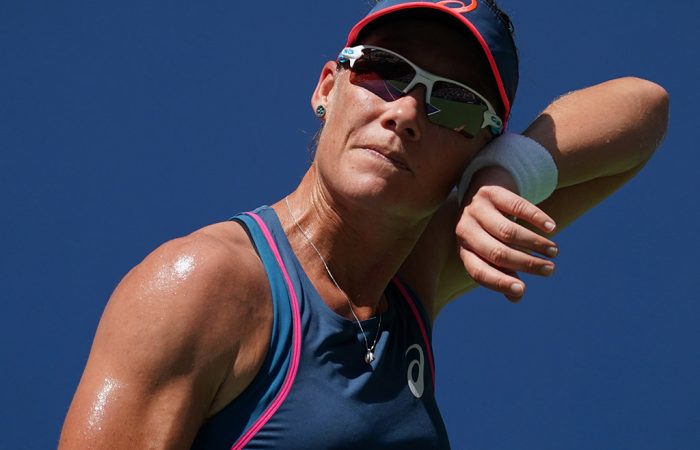 Samantha Stosur refused to blame the intense heat after a 6-3 6-2 first-round loss to Caroline Wozniacki at the US Open.

The 2011 champion warned officials that conditions were becoming dangerous for players as the temperature soared in New York.

Stosur said the welfare of players was a concern as the mercury hit 35 degrees Celsius before even 2pm.

“You do have to be careful. There were a couple of incidents yesterday as well and I think you’ve got to be sensible,” she said.

NEWS: Millman powers into second round

“It was just bloody hot. I was drenched straight away … I mean, I felt fine but it was tough out there.

“My face was so red, I had to have a shower before I did anything else.”

There had been four retirements in the men’s event by mid-afternoon at Flushing Meadows.

“What’s 10 minutes in the span of a whole day if it means the safety and health of the players for sure?” said Stosur, who likened the heat and humidity to being home in tropical Queensland but rated the conditions more uncomfortable to than at the Australian Open.

“Everyone always talks about how hot Melbourne is and ‘oh my god, it’s so bad and everything’, but the US Open’s way worse than Melbourne,” the veteran said.

“We get like one or two really hot days but I think they go on for longer and longer here in the States and there’s more retirements and everything here than what there ever is in Melbourne.

“But for some reason we get the bad rap in Australia.”

Stosur said the unpleasant conditions had no impact on her performance.

Undone by eight double-faults and 34 unforced errors as she battled to strike a balance of controlled aggression, Stosur’s campaign lasted just 84 minutes.

“I thought I played a pretty decent match. I’m actually proud of myself with what I was able to do out there,” she said.

“Obviously there were things I wasn’t so happy with but, overall, I was obviously playing a quality opponent and gave it everything I had.

“The one thing that probably did let me down was my second serve.

“But she’s No.2 in the world at the moment for a reason.”