John Millman makes swift progress against qualifier Jenson Brooksby while Matt Ebden advanced via retirement on a punishingly hot day at the US Open. 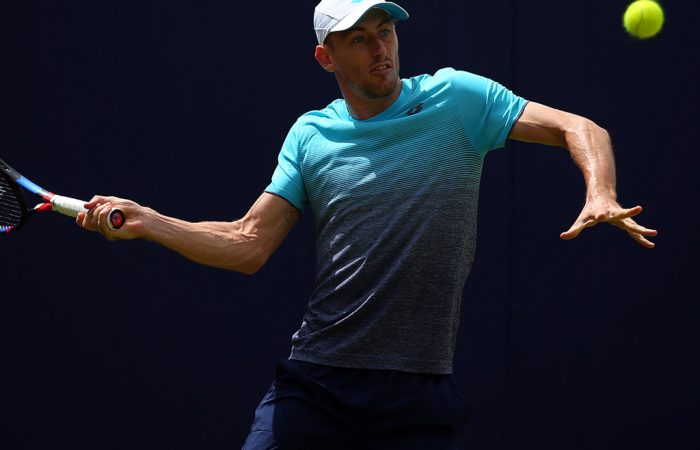 John Millman wasted little time advancing to the second round of the US Open with a straight-sets win over American teenager Jenson Brooksby.

Millman spent just one hour and 49 minutes in the suffocating heat at Flushing Meadows, thrashing the 17-year-old wildcard play-off winner 6-4 6-2 6-0 to join fellow Australian Jason Kubler in round two.

Later on Tuesday, Matt Ebden joined the Queenslander in the second round when he got past 32nd seed Filip Krajinovic.

Ebden next faces Germany’s Philip Kohlschreiber, whom he beat just a couple of months ago in Halle.

Millman expressed his disappointment at new rules introduced by the tournament, such as the shot clock, that he believed were inconsistent between the outside courts – where he played – and the show courts.

“We got 60 seconds (at the changeovers) from when the umpire calls the score. They (players on the bigger courts) get a minute and a half in there. Look, that’s a massive difference. How’s that fair?” he said.

“Sixty seconds goes pretty damn quick by the time you get the towel and the ice towel around you’re neck.

“The umpire starts the shot clock after he calls the score. If there’s a big round of applause on centre court there, then they get, what, an extra 10, 15 seconds (between points). It’s got to be the same for everyone, no?

Other Australian men in action on day two are Nick Kyrgios against Radu Albot and Alex de Minaur talking on Taro Daniel.

Kyrgios took the first set 7-5 while De Minaur raced through his first two sets 6-0 and 6-1.