Daria Gavrilova's aiming for the second week, Alex De Minaur's in awe of Wimbledon's beauty and Sam Stosur's feeling better than ever on grass. We spoke to several other Aussies, too. 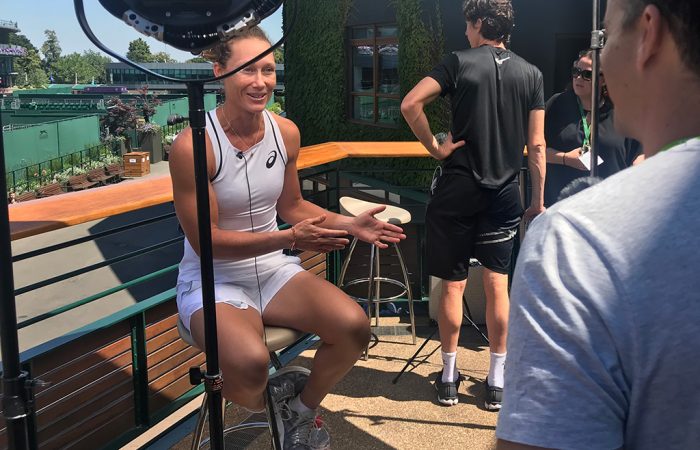 “I’ve been playing well. I lost to Radwanska (in Eastbourne) having two match points. Let’s not talk about the third set. (But) I feel like I’m playing some good tennis and grass you have to be aggressive and take chances and probably that’s the most challenging thing for me – not playing safe, being the one dictating. If I can do that, I think I can play some good tennis.

“It would be nice to – I’ve made second round here before – at least get to third round (here). Every slam, reaching second week is my goal. I just know that I can bring that level, that’s all, and you never know what’s going to happen. You just have to play tough every point and that’s it.” 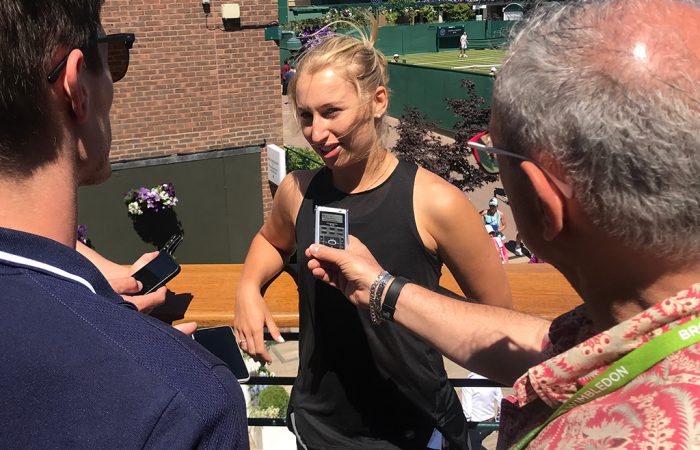 “I’ve played lots of really high level matches the last few weeks. Even the last 12-18 months, against lots of guys like (David Goffin, my first-round opponent). Even the last week I’ve played Federer, Kohlschreiber, this week I’m playing an exhibition with Nadal, so same match again, ready for top quality match. And just means I’ve got to be ready to take a seeded spot from Day 1 if I want to keep going in the tournament, which I obviously do.

“I’ve said a few times, that I wouldn’t be surprised if my best tennis, years, ranking, results, all that’s ahead of me. And that’s even showing already. So I’m not sort of surprised (with) whatever happens in the next couple of weeks – I could lose first round or I could find myself in 13 days’ time in the quarters or semis. It can really happen like that. I’m experienced enough to know that, but I’m also experienced enough to not take anything for granted. I know anything could happen. So I’m going to of course enjoy every moment and make the most of it for sure.”

“With the qualies I played last week (in Mallorca), I got six or seven matches in and I’m pretty happy with the way it’s been going. I kind of came into the grass season really not knowing what to expect. I haven’t played for two or three years now. But after playing so many matches and practice now, I’m feeling pretty good coming in.

On playing Madison Keys in round one: “It’s not the easiest draw but I’m definitely looking forward to it. I think with tennis today any match, anyone you’re playing, you have just as good a chance as if you’re playing someone else. We both have big games and go for it so we definitely won’t have too many long rallies. It’s been a while since I played her and we kinda grew up training at the same place. I know her game pretty well and she knows mine, so I’ll know what to expect.”

“He (Marco Cecchinato) is obviously a player who’s in great form. Even on grass now in Eastbourne he’s playing some really good tennis. But at the same time I feel like I’m playing some great tennis as well, so it’s gonna be an interesting match which I really look forward to. I’m just gonna go out there, leave it all out there and enjoy the moment, because it is my first main draw at Wimbledon and that’s something that I’ve always dreamed about.

“It’s crazy, just walking round trying to take it all in. It’s just so special seeing how green the grass courts are, how calm it is. Everything before the actual storm you know? Where it’s choccas with so many people when game day happens. So it’s something new for me, but I’ve really enjoyed it.”

“I feel really good. It’s probably some of the best tennis I’ve played on grass in recent years. I’ve just made a really conscious effort to try and stay up closer to the baseline and not do some of the things that I feel most comfortable on clay (laughter). Really worked hard to stay closer, take the ball a bit earlier, move forward whenever I can. Josh (Eagle) and I had a really good talk in Mallorca … he’s just been really good being kind of on me to stick with it and every single time, just play each point the way you now you kind of need to.

“I am actually enjoying it. Sometimes a little out of my comfort zone, what I’m trying to do but it’s good, it’s fun. And I’ve really tried to have a different outlook on it (laughter) that maybe what I’ve had sometimes coming here and just enjoy it. If this is the way that I want to play, then no matter what that’s what I’m going to do.

“I ended up playing an extra week in Nottingham after I went out a bit earlier in the French than what I would have liked. So I think just having even that extra week has probably helped a lot. So obviously there’s still moments where it’s a little bit tricky (for me) but overall I’m feeling really good.”

“Tough draw (against Querrey). Semifinalist last year, he’s played well on the grass. He’s beaten Novak here, he’s beaten Andy here. Yeah, he’s more than capable. I’ve got to get in a lot of return practice, make sure I get my serving percentage quite high. It’s a tough match. Seeing he is so big and it is grass so it’s a unique surface and generally favours the big servers so I’ve got to
definitely be on my game.

“That was pretty good form last year (in beating Andy Murray at Queen’s). That form is there. It’s just a question of recapturing it. It’s been a little bit of a disappointing year so far – first round of the Australian Open, first round of the French, both five-setters. I haven’t won too many of those matches, but better late than never. It’s just been quite tough.” 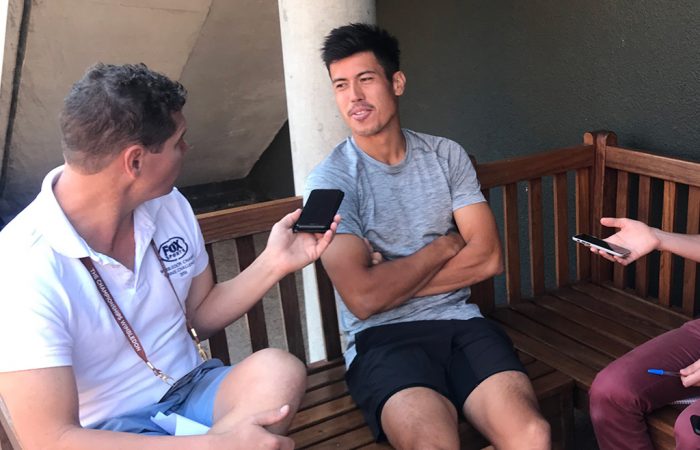 “I had a few celebratory drinks. It’s not every day you’re gonna qualify for Wimbledon. I just want to walk around all the courts (at the All England Club) and see what it’s like because the last time I was here for juniors, like eight years ago. I’m not really familiar with all the courts and things like that. I think once I’ve sussed everything out, I’ll go ‘Right, I’m ready, this is it’.

“I didn’t get much sleep last night (after qualifying). It’s all been a bit of a whirlwind the past 18 hours. I haven’t really got my head around it yet, but it’s exciting times. I didn’t (celebrate too hard). I just had a quiet one at home. I stayed in and watched Love Island. It’s been my ritual this week so I can’t steer from ritual. 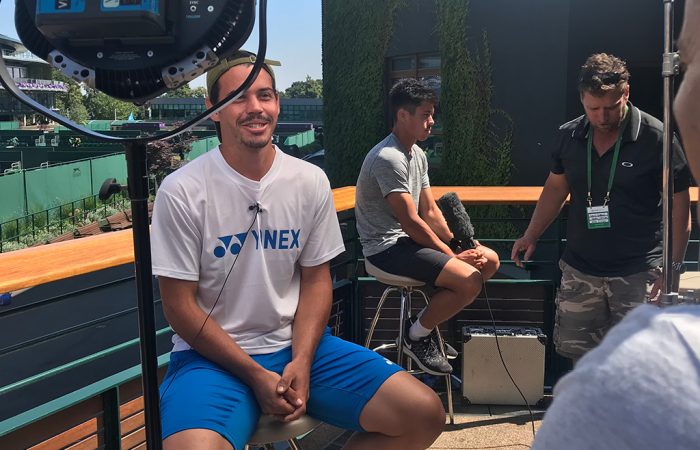 “I’ve got a tough opponent, Seppi. Obviously he’s had some good wins over some top players but I’m really looking forward to it. I’ve got a Monday start so it’s good. I can kind of keep the momentum rolling. Yesterday finishing (at qualifying), it was just good to take some time, decompress and just go over what’s happened these last couple of matches. Now I have a couple of days to prepare and can understand my opponent a little more and scout a little more over the next couple of days.

“Yesterday I had some dinner with my folks and we try not to bring up tennis there. But that would stop after like 10 minutes and then we chatted about who we might potentially play. But being with family, I love it so that really helped to really kind of lower my stress levels a bit and I look forward to this two-week event.

“I feel like I’ve been pretty unlucky. I guess you’ve gotta play the cards you’ve been dealt. When you’re doing all that rehab and physio you think about these types of moments and to be back here fit and healthy, it really makes it all worth it.

“Obviously it’s a tough draw (against Alex Zverev), and there are definitely better draws out there, but I’ve been injured for such a long period of time that to be honest I don’t really mind so much, it’s just that I’m really excited to get out there and play. And hopefully we’ll get a good court as well, and yeah, really looking forward to playing this special place.”