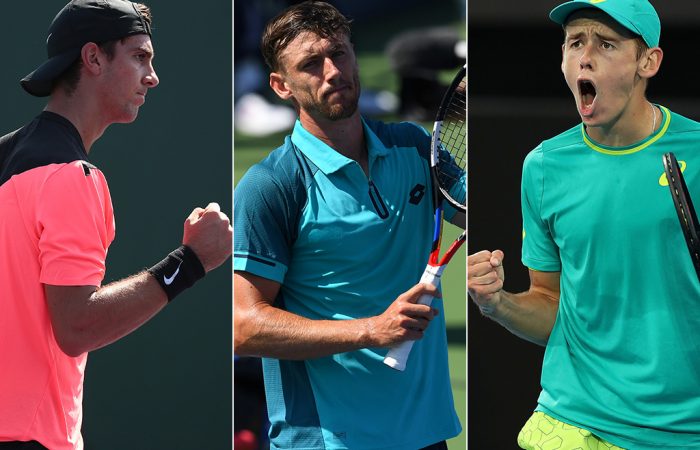 Australia now has five men in the main draw of the Miami Open after Alex De Minaur, Thanasi Kokkinakis and John Millman qualified on Tuesday.

And the Aussie wins continued in the main draw of the women’s event, with Ajla Tomljanovic reaching the second round.

The victory sets up a second-round meeting with 13th seed Sloane Stephens, the reigning US Open champion.

Millman, the third seed in qualifying, thrashed Ernesto Escobedo 6-1 6-2 in just 53 minutes to seal his place in the main draw.

Kokkinakis, a qualifying wildcard, was forced to work harder in a 7-5 7-5 defeat of Taro Daniel, who last week beat Novak Djokovic at Indian Wells.

De Minaur got past 12th seed Ruben Bemelmans 6-4 6-3, and in the main draw will face Japan’s Yoshihito Nishioka – who’s into the tournament using a protected ranking – in the first round.

Kokkinakis takes on fellow qualifier Calvin Hemery for a shot at world No.1 Roger Federer in the second round, while Millman has drawn German Peter Gojowczyk.

They join Nick Kyrgios and Matt Ebden in the 96-player main draw.

Stosur and Gavrilova will team up in the doubles event, while Barty pairs with Coco Vandeweghe. Monique Adamczak and Anastasia Rodionova are also in the draw, playing with Darija Jurak and Nadiia Kichenok respectively.

Kyrgios and Matt Reid form a wildcard pairing in the men’s doubles event, while another Aussie, John Peers, is the No.2 seed with teammate Henri Kontinen.