Stosur's return to form, Hewitt's last Open, the doubles runs of Peers and Dellacqua and the birth of a junior talent were just some of the exciting Aussie storylines at the US Open. 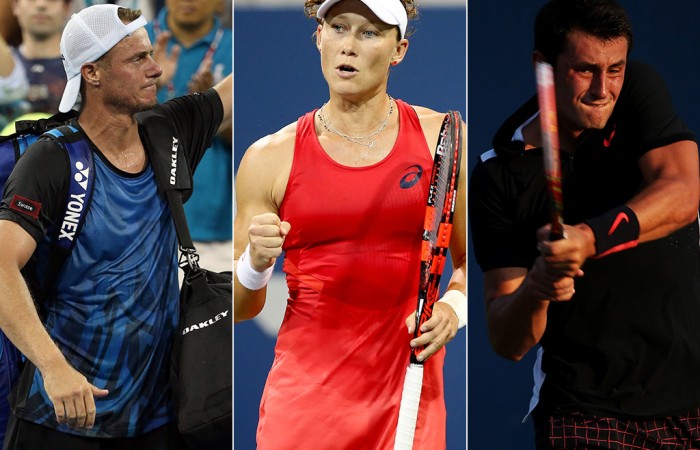 There were many in action, and they produced it all – the Australians at the US Open were involved in five-set epics, showcourt thrillers and deep runs in various draws. There was an eventual champion in Dylan Alcott, the breakthrough of junior star Alex De Minaur, continued doubles success for Casey Dellacqua and John Peers, and a fond farewell for an Aussie champion.

Here were some of the notable highlights of the US Open in which Australians featured front and centre.

Terrific Tuesday
Of the 14 nine Aussies in the main draw of the men’s and women’s singles, nine of them played on a packed Tuesday schedule. And what’s more, Aussie fans didn’t know where to turn when three of the biggest names – Sam Stosur, Bernard Tomic and Nick Kyrgios – were all playing at the same time. Although Nick Kyrgios went down to No.3 seed Andy Murray in four entertaining sets on Ashe, Stosur and Tomic shrugged off tricky opponents to advance to the second round. They were among four Aussies who advanced to the second round of singles play at Flushing Meadows – the others were Sam Groth and Lleyton Hewitt.

An all-Aussie classic
Speaking of Hewitt and Tomic, they combined to produce one of the matches of the tournament. In their first ever professional meeting, the 24th-seeded Tomic and the wildcard Hewitt faced off on Grandstand court in a match that extended from the late afternoon into the evening. What an epic it proved, with a multitude of twists and turns – Tomic served for the match in the fourth set, only for Hewitt to win four straight games and send the match into a fifth. And when Hewitt forged ahead in the fifth and scored two match points, it was Tomic’s turn to recover. The younger Aussie ultimately won 6-3 6-2 3-6 5-7 7-5 in what would be Hewitt’s 15th and final appearance at Flushing Meadows.

Kokkinakis succumbs
One of the biggest disappointments among the Aussie contingent was seeing Thanasi Kokkinakis crippled with cramps. It was a devastating turn of events for the young Aussie, who had played excellent tennis to lead 12th seed Richard Gasquet by two sets to one before his body betrayed him. Kokkinakis fought on gallantly and managed to last until early in the fifth set, but by that stage he could barely stand. He smashed his racquet in anger as he was forced to retire when trailing the Frenchman  4-6 6-1 4-6 6-3 2-0. “Probably the most (devastating loss of my career). It’s just frustrating ’cause I started playing good tennis. I was getting fired up,” he said.

Sam’s return to form
Nothing about Sam Stosur’s lead-up to the US Open indicated that she would be a force. Carrying a three-match losing streak into the year’s final Grand Slam event, the 22nd seed had drawn Timea Babos in round one, a player whom had beat her just a fortnight earlier in Cincinnati. Yet Stosur reversed that result with a straight-sets win over the Hungarian in round one, before dismissing Evgeniya Rodina in the second round. Following that came a satisfying three-set win over No.16 seed Sara Errani – who had beaten Stosur in their last two meetings – which delivered her into the second week of a major for the first time in almost 18 months. Her eventual fourth-round loss to Flavia Pennetta didn’t look so bad in the end – Pennetta went on to win the entire tournament.

De Minaur emerges
One year on after Omar Jasika stormed to the boys’ singles title at Flushing Meadows, another Aussie teenager threatened to do the same. Alex De Minaur, a Sydneysider now based in Spain, won two matches in qualifying before cutting a swathe through the draw, advancing to the last four and beating American seeds William Blumberg (No.9) and Michael Mmoh (No.2) along the way. Although he fell 6-0 6-0 in the semifinals to Roland Garros junior champ and fifth seed Tommy Paul – De Minaur had by that stage won six straight matches – it was nonetheless a stellar week for the 16-year-old.

Doubles delight
Having already enjoyed impressive seasons on the doubles court, John Peers and Casey Dellacqua continued to excel. Peers reached the men’s doubles final with Jamie Murray, just two months after reaching the same stage at Wimbledon. They ultimately fell to Frenchmen Pierre-Hugues Herbert and Nicolas Mahut. Like Peers, Dellacqua made her second Grand Slam doubles final of 2015, combining with Yaroslava Shvedova to reach the decider in New York, as they’d done in Paris in June. Their run came to an end at the hands of top seeds Sania Mirza and Martina Hingis. Despite their losses, both Peers and Dellacqua appear, along with their partners, to have qualified for the season-ending finals in London and Singapore respectively.

Another Slam for Alcott
Victorian Dylan Alcott capped a great tournament for Australia, when, on the final day of the US Open, he clinched the wheelchair quad singles title. He did so in three thrilling sets over rival David Wagner, who had beaten him earlier in the week in the round-robin stage of the tournament. The victory – his first US Open title – continues an incredible season for the 24-year-old, who in January won his first ever Grand Slam title at the Australian Open and then six months later rose to world No.1.