A bitterly disappointed Thanasi Kokkinakis was leading 12th seed Richard Gasquet before crippling cramps forced his retirement from their US Open first-round match. 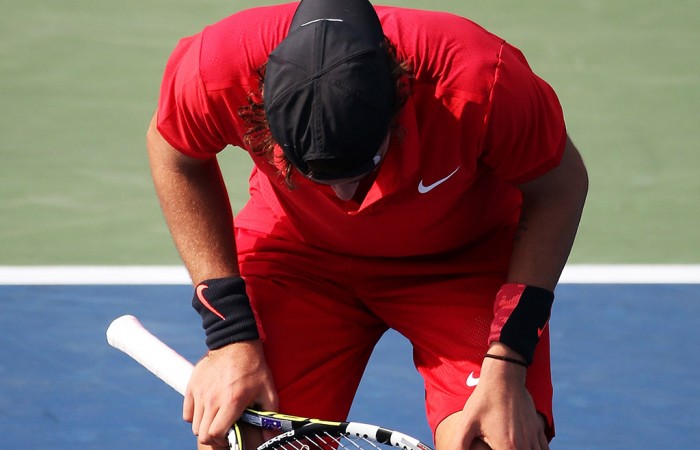 Update 9.40am: Thanasi Kokkinakis was forced to retire from his first-round US Open match against Richard Gasquet after suffering debilitating leg cramps.

In heartbreaking circumstances, the young Aussie had played brilliantly to build a two-sets-to-one lead over the No.12 seed, only for the brutal conditions to take their toll.

“Probably the most (devastating loss of my career). It’s just frustrating ’cause I started playing good tennis. I was getting fired up,” he said.

“I didn’t feel tired physically either, which is the most frustrating thing about it. I actually felt all right. My energy levels were good, and then I went up to hit a swing and volley or something, and both my calves … it was just disaster.

In the intense heat and humidity of New York, it was his right quadricep that ultimately gave him the most trouble and his movement became severely compromised.

Barely able to run for shots – and at some stages even stand up – Kokkinakis gamely tried to fight on but it was futile.

“The crowd was trying to help me. I thank them for that. I was trying to push through. I hit the odd slap winner there, but I couldn’t sustain that,” he said.

After Gasquet claimed the fourth set and moved ahead a break in the fifth, the South Australian indicated to the chair umpire that he could not continue.

“I was playing good tennis. Would have been one of the biggest wins of my career,” Kokkinakis lamented.

“Maybe I’ll look into researching a bit more and try to get my tests done so it doesn’t happen again because there’s nothing more frustrating.”

At the same time Kokkinakis was battling on Court 5, his compatriot John-Patrick Smith was engaged in a battle of his own against Russian veteran Mikhail Youzhny.

After being blown away in the first set, the Queenslander levelled the match with a great second set performance.

Yet despite gaining service breaks in both the third and fourth sets, Smith could not maintain his advantage.

“It was one of those days where I wasn’t serving very well … I thought if I served well I probably could have closed it out in four sets,” Smith said.

“Being up two breaks in the fourth; that’s a little bit of a hard thing to swallow especially when my game revolves around my serve.

“It’s a little bit reminiscent of Wimbledon, where I was up two-sets-to-love and one tiebreak away from winning there. Here, I felt like I was one service game away from really making a big push in the third set.

“Just got to cross that finish line somehow. That’s going to come obviously with more exposure playing these big guys, and more matches.”

Later on Tuesday, James Duckworth was eliminated from the tournament by Korean young gun Hyeon Chung.

The Sydneysider was permitted just six games in a 6-3 6-1 6-2 loss which Chung completed in 96 minutes.