Lleyton Hewitt reflects on a magnificent 16-year career of US Open performances that ended with a five-set defeat on Thursday to fellow Aussie Bernard Tomic. 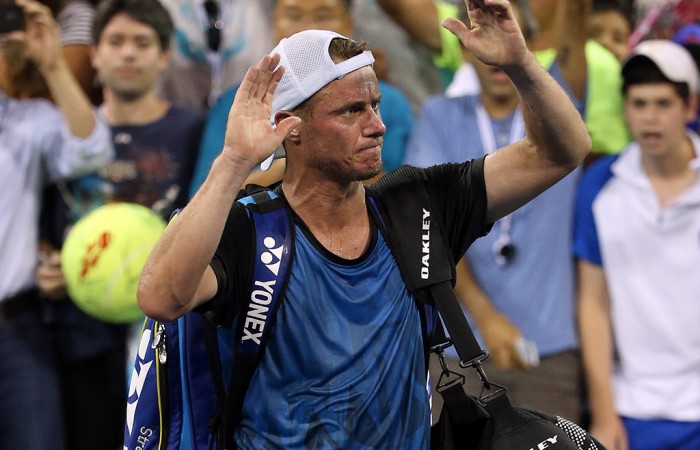 He fell tantalisingly short of another famous comeback win, but Lleyton Hewitt still received the thumbs up from his biggest fan as Australia’s great tennis warrior savoured one final vintage act at Flushing Meadows.

Hewitt the singles performer made a most fitting US Open farewell with a gallant 6-3 6-2 3-6 5-7 7-5 second-round loss to Bernard Tomic and said seeing his six-year-old Cruz also go the distance in the front row was almost as good as a win.

“He said I nearly won,” Hewitt beamed with his starstruck son still hanging on his father’s every word in the post-match press conference.

“But, no, he gets on well with Bernie too. It was good. He loves his tennis. I’m very proud that he could sit through five sets.

“Now he knows what Bec and my parents have had to sit through their whole life.

“Hopefully some of this rubs off and he wants to be out here some day.”

Hewitt’s folks have sat through 58 epic five-setters now and they were on Grandstand too as the 34-year-old former world No.1 completed the full circle in a distinguished US Open career.

A triumphant champion over Pete Sampras in 2001, runner-up to Roger Federer in 2004, three-times a semifinalist and, finally, a sentimental favourite with New York fans in a 16-year Open career.

“They like the old guy,” Hewitt said as he recalled his fondest memories of his most successful Grand Slam tournament.

Destroying Sampras is the obvious highlight, but Hewitt remembers so many more under the bright lights of tennis’s biggest arena.

“The night matches are always special,” he said.

“That’s probably the biggest difference to a lot of the other tournaments. When you play at night here, great atmosphere here, obviously 23,000, 24,000 people. You really feel like you are the showtime, prime-time match.

“When I beat (Juan Martin) del Potro in the second round in five sets (in 2012), I came back from a foot surgery and didn’t know if I’d have the opportunity to compete out there on the centre stage against those guys again.

“To beat another former winner here in the night match, that was probably, apart from winning it, one of my biggest ones.

“Obviously my first breakthrough year in 2000 of making the semis in singles and winning the doubles the year before I won it. This has always been result-wise one of my more successful slams.”

Hewitt had two match points on Thursday night to add to the legend.

But for the sixth five-setter in a row, stretching back to his mighty win over del Potro, the veteran was unable to close it out.

“I felt like once I got to the fifth, if I could have broken that first game as well, I could have really opened it up,” he said.

“Bernie’s got such an easy serve, though; he hits his spots well. He was able to do it in that first game from love-40 down.

“That sort of just kept the momentum going for him there. If I was able to break it open early in the fifth … but then obviously had 15-40 at 5-3. He was kind of in that mood of just going for everything. Couple of shots went in.

“The first backhand he hit, hit the tape. Went for a winner. The next one I felt like I scrambled as much as I could have. He was sort of just redlining on every shot.”