Despite their loss in the US Open doubles final, Casey Dellacqua and Yaroslava Shvedova had plenty of positives to take out of their fortnight at Flushing Meadows. 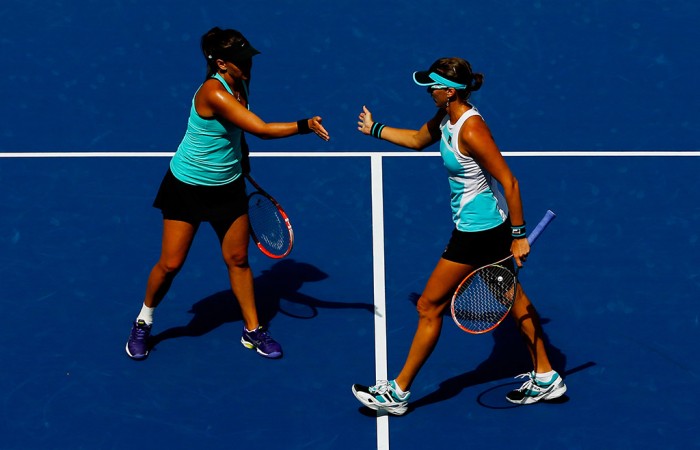 Australian tennis ace Casey Dellacqua is drawing on the positives after suffering doubles disappointment at the US Open in New York.

Dellacqua’s 6-3 6-3 loss with Kazakh Yaroslava Shvedova to world No.1s Martina Hingis and Sania Mirza was the West Australian’s sixth defeat from as many finals in Grand Slam doubles.

> READ MORE: Top seeds too strong for Dellacqua and Shvedova

But the 30-year-old’s first million-dollar season and qualification for the elite eight-team WTA Finals in Singapore has more than compensated for Dellacqua’s latest disappointment.

“The fact that I can say I’m a six-time Grand Slam finalist is good for me. Obviously I’d love to win them but if I finish my career (like that), I’m okay with that.

“Hopefully one day I’m remembered for being a good competitor, a good player. That’s what’s important to me.

“The fact I’ve made six finals, I’m really proud of that achievement as well.”

Dellacqua’s singles ranking is set to drop from 60th to 76th in the world after her failure to defend her fabulous run to the final 16 at Flushing Meadows last year.

But with no intention to ditch her singles plans, Dellacqua and Shvedova have much to look forward to for the remainder of 2015.

After only teaming up in May, the pair have made two major finals in Paris and New York, won a title on clay in Madrid and reached the quarterfinals on grass at Wimbledon.

Dellacqua’s all-court success has already earned her $US840,299 ($A1.19 million) this season, guaranteeing the shot-making southpaw her biggest yearly earnings yet.

But she’s not done yet and her and Shvedova have a shot of winning the season-ending championship in Singapore.

“We’ve only played since May as well so even since then I think we’ve come a long way,” Dellacqua said.

“The fact we’ve made Singapore after a handful of tournaments is a pretty good achievement, something to be proud of for us.

“I look forward to the Asian trip and obviously finishing the year in Singapore will be awesome.”

Shvedova, too, has even more to look forward to post-New York.

The Kazakh, who was meant to get married on Saturday, will race home to enjoy a somewhat abbreviated wedding before jetting off to Asia with her husband.

“I’m gonna try and fly out tonight and it’s gonna take for me one day to get home, so I’ll only be landing on Tuesday morning. And I think we just go then straightaway (to get married) because then I will not be back home until the end of November,” she laughed.

“(After the wedding) I will fly the next day to Korea because I have qualification there to play, and he’s gonna go with me for a few tournaments in Asia and it’s gonna be like a honeymoon tour.”