Daria Saville’s resurgence continues, with the popular Australian dominating Petra Kvitova to advance to the third round at Roland Garros. 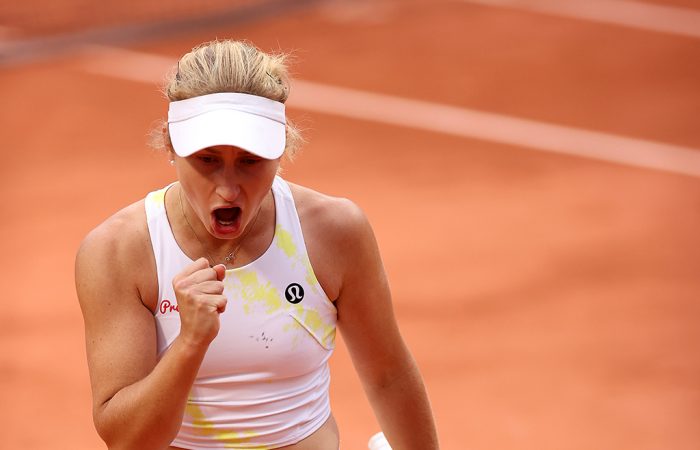 Daria Saville’s resurgence continues, with the popular Australian dominating Petra Kvitova to advance to the third round at Roland Garros.

Saville, a wildcard, upset the former world No.2 and 32nd seed 6-4 6-2, breaking serve early in both sets to set the tone for the match.

She matches her career-best result in Paris, after also appearing the last 32 in 2018.

Her defeat of Kvitova, a two-time Wimbledon champion, marked another impressive result for Australian women after Ajla Tomljanovic upset world No.5 Anett Kontaveit in the first round.

But Tomljanovic was unable to keep her run going, falling in a heartbreakingly-close 6-4 6-7(5) 7-5 loss to Varvara Gracheva.

Kubler won four straight matches at Roland Garros after reaching the second round as a qualifier and will return to the world’s top 150 thanks to that performance.

Yet few players have risen as dramatically or impressively as Saville, who is projected to vault to the brink of the top 100 – at No.103 – after languishing outside the top 600 just three months ago.

The 28-year-old, working her way back from years of injury struggles, flourished during the US spring hard-court season, following her fourth-round round run at Indian Wells with a quarterfinal in Miami.

She has won 11 of her past 16 matches, with three of those – over Ons Jabeur and Elise Mertens at Indian Wells, and now Kvitova at Roland Garros – coming against seeded opponents.

She also improved her head-to-head record over Kvitova to 4-2.

🇦🇺 Aussie Aussie Aussie 🇦🇺@Daria_gav knocks out the 32nd seed to advance to the third round in Paris for the second time.#RolandGarros pic.twitter.com/5GZIiKNWmn

The first of those wins against the Czech came at Australian Open 2016, part of a breakthrough run at Melbourne Park that saw Saville reach the fourth round at a Grand Slam tournament for the first time.

She now stands one win away from a return to the second week of a major, more than five years after last appearing at that stage (Australian Open 2017).

But she will have to overcome talented Italian lefty Martina Trevisan to do so.

Trevisan is enjoying a seven-match winning streak after capturing the WTA title in Rabat last week, and is a former Roland Garros quarterfinalist.

“I warm up with her this morning, but I know her since long time. If she beat Kvitova, I think she is in good shape also for her,” Trevisan said of Saville, ahead of the pair’s first career meeting.

“So it will be a very tough match, she’s a fighter, she run a lot, so I will prepare with my team and do our best.”

Should Saville triumph, it would mark her best ever performance at Roland Garros, and see her return to the world’s top 100.

The world No.161 from Queensland claimed 18 of his past 22 matches on clay but in Norrie faced an opponent on his own winning streak.

The world No.11 Brit had claimed five straight matches after lifting a fourth ATP trophy in Lyon last week and defeating French wildcard Manuel Guinard in the first round at Roland Garros.

Norrie extended that streak to six matches as he beat Kubler in two-and-a-half hours.

Seizing opportunity was key for the Brit, who converted his lone break point in the first set. He took a 2-0 lead in the second set and wrestled back control after Kubler levelled in the fourth game.

The Queenslander gained an early advantage with a break of serve in the third set, but Norrie claimed the last six games of the match to close out his victory.