There are 11 Australians competing on day three in New York, including rising star Alexei Popyrin in second-round men's singles action. 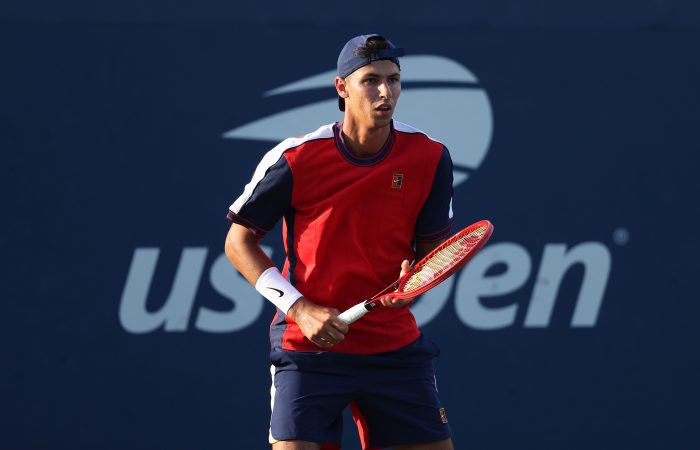 The highly-touted Alexei Popyrin leads the Australian charge on day three of the US Open 2021 championships, with the 22-year-old meeting No.15 seed Grigor Dimitrov in the second round of the men’s singles competition.

The doubles events also begin in New York, which means we have 11 Australian players competing across a jam-packed and exciting schedule.

Aussies in action on day three:

Alexei Popyrin (AUS) v [15] Grigor Dimitrov (BUL)
Men’s singles, second round, Court 5, first match (from 1am AEST)
On the eve of the tournament, former US Open champion Lleyton Hewitt declared Popyrin “has got the weapons to play well” in New York. The 22-year-old certainly proved he is one to watch in the opening round, not dropping serve to beat world No.108 Radu Albot in four sets. The world No.73 faces a bigger test in the second round today, playing world No.18 Dimitrov. The 30-year-old Bulgarian has been ranked as high as No.3 and was a US Open semifinalist in 2019. But the towering 196-centimetre Popyrin certainly won’t be daunted by the challenge. Although he owns a 3-12 career win-loss record against top 20-ranked opponents, two of those wins have been on the Grand Slam stage.
Head-to-head record: Dimitrov leads 1-0
Last meeting: Dimitrov won 6-4 6-7(5) 6-3 (Melbourne 2021)

Marc Polmans (AUS)/Jurgen Melzer (AUT) v Jeremy Chardy (FRA)/Fabrice Martin (FRA)
Men’s doubles, first round, Court 5, third match
This is Polmans’ second appearance in a US Open doubles draw – and first since 2017. The 24-year-old from Melbourne, who has won three ATP Challenger doubles titles this season and is currently ranked No.97, is partnering Austrian veteran and world No.26 Melzer for the first time. The left-handed 40-year-old Melzer is a former US Open doubles champion, claiming the 2011 title. They play the experienced French combination of world No.55 Chardy and world No.37 Martin, who were Roland Garros 2019 finalists.

[10] Storm Sanders (AUS)/Caroline Dolehide (USA) v [WC] Lauren Davis (USA)/Ingrid Neel (USA)
Women’s doubles, first round, Court 6, third match
Sanders is currently Australia’s top-ranked woman in doubles at world No.41. The left-handed 27-year-old, who is playing with world No.26 Dolehide for the first time since their Wimbledon semifinal, is making her second career appearance in a US Open doubles draw. She is looking for a first win in New York, after exiting in the first round in her 2020 debut. The Australian-American combination, who have a 8-2 win-loss career record from their two previous tournaments together, face a wildcard pairing in the first round.

James Duckworth (AUS)/Jordan Thompson (AUS) v [13] Rohan Bopanna (IND)/Ivan Dodig (CRO)
Men’s doubles, first round, Court 10, third match
All-Australian combination Duckworth and Thompson are teaming up for the third time in their professional careers – and for the first time since Australian Open 2019. This is 29-year-old Duckworth’s US Open doubles debut, while 27-year-old Thompson is competing for a third time. They face the experienced No.13 seeds in a tough opening-round match. The 36-year-old Dodig is ranked No.12 and won the Australian Open doubles title earlier this season, while 41-year-old Bopanna was a US Open finalist in 2010.

Luke Saville (AUS)/John-Patrick Smith (AUS) v Ricardas Berankis (LTU)/Benoit Paire (FRA)
Men’s doubles, first round, Court 6, fourth match
World No.29 Saville and world No.71 Smith are competing in their second Grand Slam tournament together – and first since Australian Open 2016. They have made two tour-level quarterfinals as a team this season, including at Winston-Salem last week. This is 27-year-old Saville’s second US Open appearance, while 32-year-old Smith is playing in New York for the sixth time in his career. Smith’s best US Open result is a quarterfinal run in 2017, while Saville is aiming to record a first win at the tournament.

Alex de Minaur (AUS)/Matt Reid (AUS) v John Millman (AUS)/Thiago Monteiro (BRA)
Men’s doubles, first round, Court 13, fourth match
At least one Australian winner in guaranteed in this first-round doubles match. This is 22-year-old De Minaur and 31-year-old Reid’s seventh Grand Slam appearance as a team and second in New York. They have a 5-6 career record together in major tournaments, only previously losing in the opening round once. Millman, a 32-year-old with a 1-3 career record in US Open doubles matches, enjoyed a career-best third-round run with 27-year-old Monteiro at the Australian Open earlier this year.

[16] Ellen Perez (AUS)/Kveta Peschke (CZE) v Ivana Jorovic (SRB)/Lesley Pattinama Kerkhove (NED)
Women’s doubles, first round, Court 14, fourth match
Since teaming up in August, 25-year-old Australian Perez and 46-year-old Czech Peschke have won five of their eight matches together. Peschke is a former world No.1 and a six-time doubles quarterfinalist at the US Open, while world No.46-ranked Perez’s best US Open result from two previous appearances is reaching the third round in 2019. Their first-round opponents are less experienced – this is 24-year-old Jorovic’s first US Open doubles appearance and 29-year-old Pattinama Kerkove’s second.