Ajla Tomljanovic off to a winning start at Tokyo Olympics

Ajla Tomljanovic advances to the second round of the Tokyo Olympics with victory over Yaroslava Shvedova. 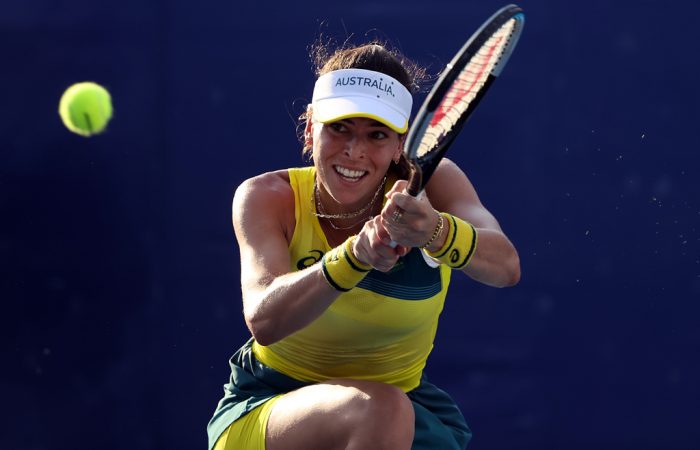 Ajla Tomljanovic has launched her Tokyo Olympics campaign with victory over Yaroslava Shvedova.

Maintaining momentum from her first Grand Slam quarterfinal appearance at Wimbledon only weeks ago, the Australian was leading 7-5 3-2 when her Kazakhstani opponent was forced to retire.

Tomljanovic’s victory sets up a second-round match with Elina Monfils (nee Svitolina), who arrives in Tokyo after her recent marriage to ATP player Gael Monfils.

Tomljanovic demonstrated important composure in her Olympic Games debut, recovering from a 3-5 deficit in the first set. She won four straight games to close out the opener in 55 minutes.

Further pressuring Shvedova – who returned to the tour in 2020 after becoming a mother to twins in 2018 – by securing the opening two games of the second set, Tomljanovic did not face another break point in the 90-minute encounter.

It is believed that Shvedova’s retirement was heat-related.

Tomljanovic is the lone Australian woman in the singles draw in Tokyo, after Ash Barty was shocked by Sara Sorribes Tormo in her opening match. Sam Stosur exited to No.15 seed Elena Rybakina yesterday.

Buoyed by the confidence of her best Grand Slam showing, the 28-year-old will aim to claim a first professional win in four matches against Monfils. Tomljanovic’s last loss to the sixth-ranked Ukrainian was at Roland Garros three years ago.

Australian women also continue their Tokyo Olympics doubles campaign. Barty and Storm Sanders have already progressed to the second round, while Ellen Perez and Sam Stosur claimed a confidence-boosting win over Jelena Ostapenko and Anastasija Sevastova.

Victory came down to a match tiebreak for Perez and Stosur, who defeated their Latvian opponents 4-6 6-1 [10-5] to set a second-round with Romanian duo Raluca Olaru and Monica Niculescu.

In a successful day for Australian men, James Duckworth and Max Purcell joined John Millman in the second round of the Tokyo 2020 singles event.