John Millman makes a strong start at the Tokyo Olympics, while Ash Barty and Storm Sanders show impressive form as they progress in the doubles. 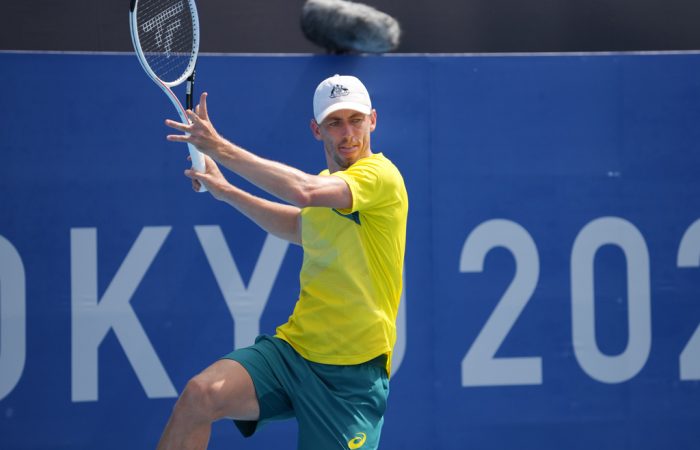 The quest to add to Australia’s medal tally in tennis is off to a successful start at the Tokyo Olympics, with John Millman advancing in his first-round match against Lorenzo Musetti.

There was also an impressive start for Ash Barty and Storm Sanders in doubles, the Australian women surrendering only three games as they overcame Japanese team Nao Hibino and Makoto Ninomiya.

Millman required 96 minutes to claim a 6-3 6-4 win against the Italian, who at age 19 was the youngest man to start in the 64-player singles draw in Tokyo.

The 32-year-old Queenslander, by contrast, is an experienced competitor contesting his second Olympics.

Millman achieved history as the only man to claim a double-bagel victory in Olympic tennis in his first-round win over Ricardas Berankis in Rio de Janeiro and seemed similarly strong in the earliest stages against Musetti.

The world No.44 Australian saved both break points he faced in the first set against 61st-ranked Musetti and with a decisive break of serve in the eighth game, Millman closed out the set in 47 minutes.

A more complicated second set followed, Millman securing another break of serve in the first game but Musetti levelling three games later. After an exchange of breaks in the fifth and sixth games, Millman took a 5-4 lead and served out victory.

Millman next faces Spain’s No.16 seed Alejandro Davidovich Fokina, a 6-3 6-0 winner over Pedro Sousa of Portugal.

Barty and Sanders will take confidence from their near flawless win over Hibino and Ninomiyo.

Racing to a 4-0 lead at the Ariake Tennis Park, the Australian team soon held the first-set advantage and did not face a break point as they completed victory in 50 minutes.

Barty and Sanders will meet Chinese pair Zu Yi-Fan and Yang Zhaoxuan in their second-round match.

The world No.20 Rybakina secured a 6-4 6-2 first-round victory over Stosur in one hour and 10 minutes.

Contesting her record fifth Olympics Games, Stosur is paired with Ellen Perez in doubles. The Australian duo face Latvian team Jelena Ostapenko and Anastasija Sevastova in the first round.

Nine of Australia’s 10-strong team return to the court in Tokyo tomorrow with world No.1 Ash Barty launching Day 2 play with her first-round singles match against Spain’s Sara Sorribes Tormo.