Australian Max Purcell has upset world No.15 Felix Auger-Aliassime to reach the second round in the men's singles competition at the Tokyo 2020 Olympic Games. 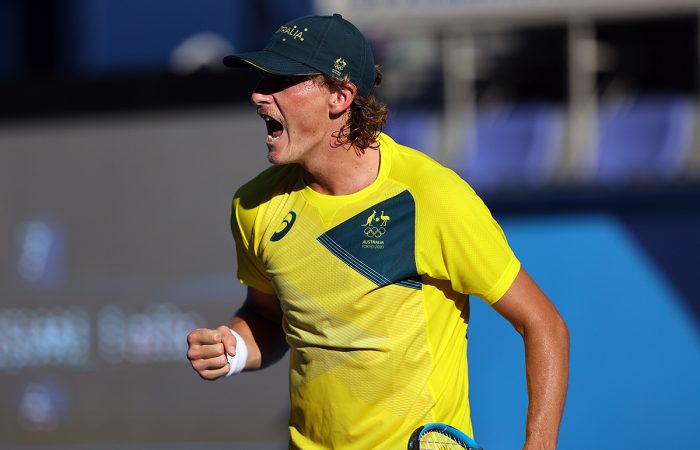 Max Purcell has made the most of a last-minute place in the men’s singles draw at the Tokyo 2020 Olympic Games, posting the biggest win of his career today.

The 23-year-old Australian was added to the draw as an alternate, replacing two-time defending champion Andy Murray. The Brit, who is managing a quad injury, withdrew to focus on his doubles campaign.

“I went on court just before 3pm and I found out (I was playing) just before 11am, so I had about four hours’ (notice),” said Purcell. “But the whole time I’ve been here I’ve been itching to play singles, so I’m always ready.”

Purcell took advantage of the opportunity, beating ninth-seeded Canadian Felix Auger-Aliassime 6-4 7-6(2) in the opening round. It is his first career win against a top-15 ranked opponent.

Purcell was unawed against the world No.15-ranked Canadian, hitting nine winners to six in a 48-minute opening set, and building a 3-1 advantage in the second set.

Auger-Aliassime, who reached the Wimbledon quarterfinals earlier this month, fought back to force the second set into a tiebreak. But the 20-year-old couldn’t stem Purcell’s momentum, with the Australian sealing victory after one hour and 55 minutes on court.

“I feel like the difference between players ranked 200 and Felix, or players around there, is just a bit of belief,” Purcell said. “I felt like I could win, I believed I could win… and I won.”

It is the sixth top-100 win of Purcell’s career – and his fifth this season. Purcell, who is currently at a career-high ranking of world No.190, has now won nine of his past 10 singles matches.

World No.190 @maxpurcell98 – a late replacement for Andy Murray in the men’s singles draw – produces the win of his career to beat No.9 seed Felix Auger-Aliassime 6-4 7-6(2) for #AUS#Tokyo2020 | #Tennis | #Olympics pic.twitter.com/kdiR8tkSWv

Purcell is the first Australian man to score a top-20 singles win at an Olympic Games since Lleyton Hewitt’s second-round victory against Croatian Marin Cilic at the London 2012 Olympic Games.

He now joins John Millman and James Duckworth in the second round. It is the first time since the Atlanta 1996 Olympic Games that three Australians have progressed beyond the first round in a men’s singles draw.