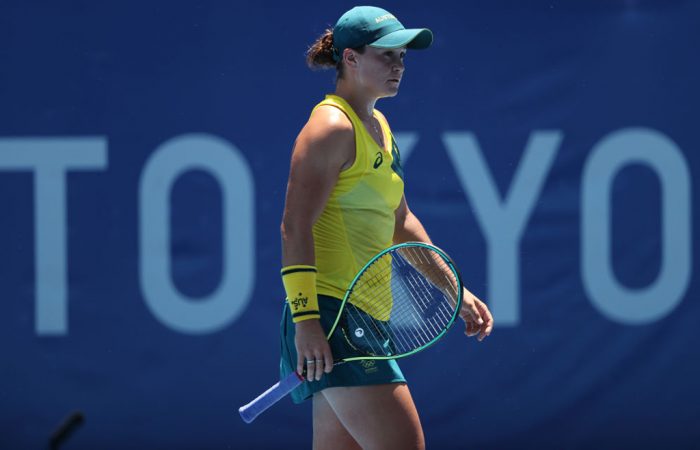 Sorribes Tormo played fearlessly against the recently crowned Wimbledon champion, achieving the biggest win of her career in an hour and 34 minutes.

Entering Tokyo at a career-high world No.48, the 24-year-old Sorribes Tormo was all-business as she capitalised on an usually high error count from Barty.

“It was just loose. I knew I wanted to try and take the match on today. It was going to be a fine line of pushing too hard and not getting stuck in the patterns that I didn’t want to get stuck in,” admitted Barty, who struck 55 unforced errors, compared to 13 from the Spaniard. “(I was) just too erratic (and) wasn’t able to make enough balls.”

While the match was played in searing temperatures at the Arieke Tennis Park, the Australian refused to blame conditions for the loss to her lower-ranked opponent.

“It’s brutal but this is like an Australian summer for me,” Barty told Channel 7 commentators. “I quite enjoy the heat. Obviously I love playing out here in these kinds of conditions but it wasn’t meant to be today.”

Sorribes Tormo asserted authority from the outset, securing a double break of serve to take a 4-1 first-set lead over the world No.1. While Barty claimed one of those breaks back, Sorribes Tormo closed out the opener in 50 minutes.

Barty appeared poised for a comeback when she recovered from an early service break in the second set, but the determined Sorribes Tormo edged ahead with another break in the seventh game. She consolidated and with her fifth break of serve, secured the defining victory.

“I wanted to do really well here and today wasn’t my day but I get to look forward to playing doubles with Storm and really getting in and still enjoying this Olympics experience,” said Barty.

Maintaining momentum from her first Grand Slam quarterfinal appearance at Wimbledon only weeks ago, the Australian was leading 7-5 3-2 when her Kazakhstani opponent was forced to retire with an apparent heat-related issue.

Tomljanovic’s victory sets up a second-round match with Elina Monfils (nee Svitolina), who arrives in Tokyo after her recent marriage to ATP player Gael Monfils.

In men’s singles action, James Duckworth and Max Purcell joined countryman John Millman in the second round . It ensures Australia’s most successful Olympics showing in men’s singles since the Atlanta Olympics in 1996.

Luke Saville, who also entered the singles draw as an alternate, exited to No.7 seed Hubert Hurkacz.