Delighted to be a part of Australia’s Olympics team, players including Ash Barty, John Millman and Sam Stosur are preparing to deliver their best in Tokyo. 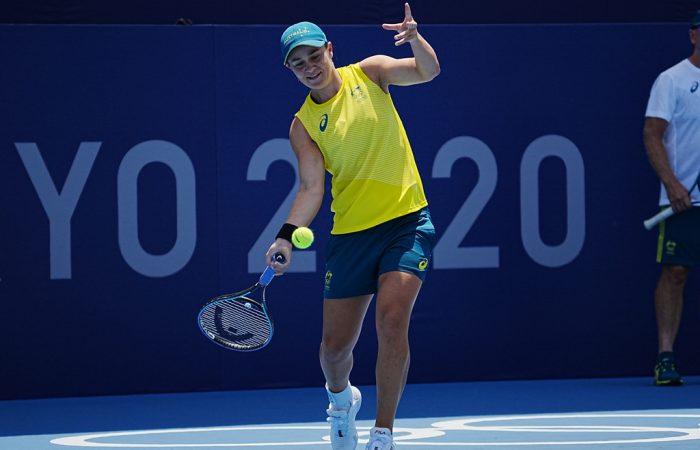 Sweating it out at the Ariaka Tennis Park as they prepare to contest the Tokyo Olympics, the spirit of camaraderie among Australia’s top players is unmistakable.

While accustomed to challenging for the game’s most elite individual prizes, players take a special pride in competing for their nation.

“I think representing your country is the highest honour,” related world No.1 Ash Barty.

“You’re playing for something bigger than yourself; you’re playing to make people proud, and that’s not just with the results, that’s with the attitude.”

From the highest individual high to the ultimate team event …

Boosted by the positive example of the recently crowned Wimbledon champion, Australia’s 10-strong team brings a unique energy to Tokyo.

There are 46 nations represented in Olympic tennis events – with medals on offer in men’s and women’s singles and doubles, as well as mixed doubles – but few teams have quite the same blend of competitors as Australia.

Sam Stosur returns to the team as a five-time Olympian, becoming the first Australian player to have competed so many times for her nation.

John Millman and John Peers are contesting the Olympics for a second time, while all other Australian tennis team members – including Ajla Tomljanovic, Ellen Perez, Storm Sanders, James Duckworth, Luke Saville and Max Purcell – are debutantes.

“Making my Olympic debut, it’s a dream come true,” said Tomljanovic, who returned to world No.51 after reaching a first Grand Slam quarterfinal at Wimbledon.

“I come from a family where Olympics were a big thing. My dad played team handball, so that was kind of the pinnacle of his career. So for me to go now, I think it makes him really proud and I’m really happy too.”

While keenly aware of the example they set as Olympians, many Australian players can also recall how Olympic tennis inspired their own progress.

The enduring Stosur made her Olympic debut at Athens 2004, where Alicia Molik was a singles bronze medallist.

“I remember watching her win that medal and just thought it was the best thing ever,” said Stosur of Molik, who is now the Australian women’s captain.

“She’s been there, done that and I’m sure she’s able to pass on many words of wisdom, hopefully to all of us.”

Millman echoes that sentiment as he reflects on Mark Woodforde and Todd Woodbridge men’s doubles gold medal victory at the Atlanta 1996 Olympics. “I remember the Woodies getting the win,” smiled the Queenslander, who recorded his own Olympic milestone in Rio de Janeiro.

Millman’s 6-0 6-0 victory over Lithuania’s Ricardas Berankis made him the first man to claim a double-bagel at an Olympic tournament. “I think playing Davis Cup and representing your country at the Olympics for me, are my two greatest achievements,” Millman reflected.

“I think it’s only been intensified after having those memories in 2016 and in Rio, for me, it was pretty special to, to create Olympic history.

“When I step on the court and represent my country, I feel as if I’m playing for something a little more than, than, than just myself,” he added. “And when you get to wear the green and gold, I think you, you try to lift to that next level.”

With memories of representing Australia at Rio de Janeiro in 2016 still strong, Peers is equally passionate about his Olympic experience.

“It’s a huge honour to anytime I get to represent Australia, especially to be able to go to my second Olympics is something as a child, you always could dream of,” said the 32-year-old, who will team with Purcell in doubles after Alex de Minaur was unable to travel to Tokyo.

“To start saying that I’m going to be a two-time Olympian has actually given me some goosebumps.”

Spirits will be even higher for any Australian player who can achieve a podium finish in Tokyo.

“Hopefully we can get a few medals and do Australia proud,” said Peers. “It’s definitely something that I know going into the Games we’re all looking to do and, and looking to achieve. I think the sky’s the limit.”