The tennis draws for the Tokyo Olympic Games are set. Find out who our Aussie representatives play in the opening round ... 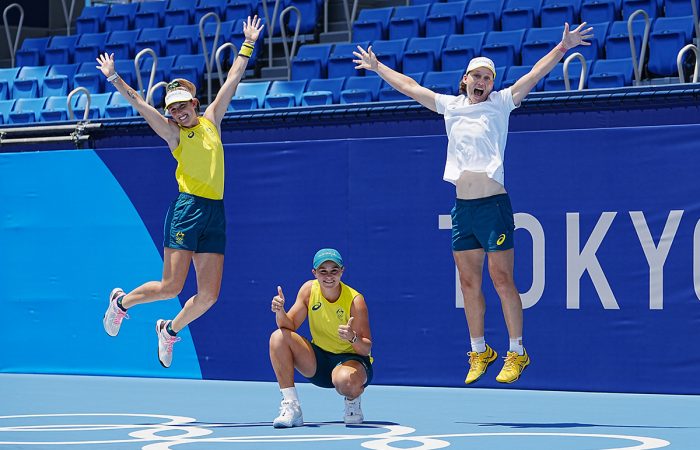 Barty, who will be competing for the first time since winning Wimbledon, has never previously played the world No.48.

Olympic debutant Ajla Tomljanovic and five-time Olympian Sam Stosur have both been pitted against players from Kazakhstan in their opening-round singles matches.

Tomljanovic plays former world No.25 Yaroslava Shvedova, who recently returned to the tour after having twins, while Stosur meets world No.20 Elena Rybakina.

John Millman is spearheading the Australian charge in the men’s singles competition.

The 32-year-old, who is making his second Olympic Games appearance, plays 19-year-old Italian Lorenzo Musetti in the opening round. It will be Millman’s first career meeting against the rising Musetti, who pushed world No.1 Novak Djokovic to five sets in the fourth round at Roland Garros earlier this year.

James Duckworth is the other Aussie hope in men’s singles. Competing in his first Olympic Games, 29-year-old Duckworth plays Slovak Luka Klein in the first round.

Ash Barty and Storm Sanders are the sixth seeds in the women’s doubles draw. They begin their campaign against local hopes Nao Hibino and Makoto Ninomiya.

Ellen Perez and Sam Stosur have drawn Latvian duo Jelena Ostapenko and Anastasija Sevastova in the first round.

Both of the Australian pairs in the men’s doubles draw have avoided seeded opponents in the opening round.

The tennis competition in Tokyo begins on Saturday and the mixed doubles draw will be revealed on Tuesday.