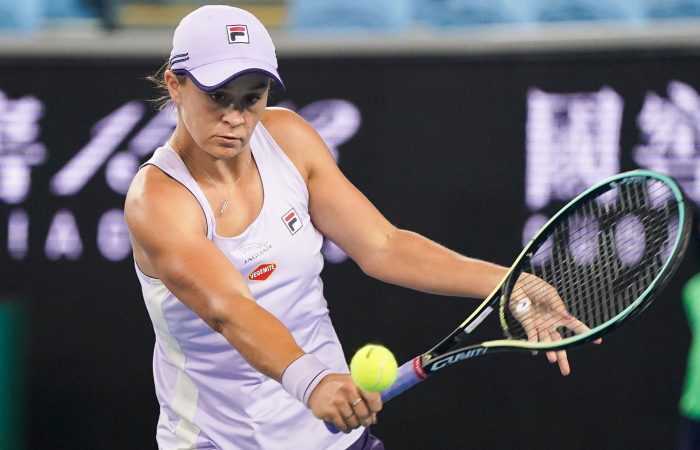 Ash Barty is a role model in many ways – as the 24-year-old is demonstrating at Australian Open 2021.

The world No.1 is through to the fourth round without dropping a set and is quickly adapting to each new challenge she faces.

Barty played a fellow Australian for the first time in her Grand Slam career in the second round, surviving a spirited effort from Daria Gavrilova.

In the third round, she overcame Russian Ekaterina Alexandrova. It was her first career meeting with the No.29 seed and also her first experience playing a Grand Slam stadium match without a crowd.

“I feel like I’m learning on the go,” Barty says.

“It’s been a focus of mine to continue to do all the right things regardless of what the score is in the match, regardless of whether I’m a set up or set down, a break up, break down, or anything indifferent. It’s about going through all of my processes the exact same, regardless of the score, and making sure that I stick to that.”

That exemplary focus complements an understated confidence in her game. Barty’s slice backhand, in particular, continues to evolve as an important weapon.

“I think everyone has a unique game, a point of difference, everyone has their own unique style and the way they go about it. But for me, it’s a part of my game that I enjoy bringing into the match,” Barty says of her highly-respected backhand.

“It’s always a shot I’ve enjoyed being able to learn and kind of develop over time, where I can maneuver the ball around the court. It’s obviously something I love to play around with. At times I overuse it, so it’s about getting that balance right.”

We keep on fighting 💜 pic.twitter.com/ey6uUtcft1

Striking the right balance could prove pivotal to her chances tonight against big-hitting American Shelby Rogers in the fourth round. It is their second meeting in as many weeks.

“At times it will be me scrapping and fighting. Other times I will be trying to take the more aggressive option,” Barty says. “Sometimes you have to almost dangle a carrot, in a way, where you tempt her to try and take some risks. I’ll have to do that, try all different things, just as I did last week and just as I’ve done every time that I’ve played her.”

That insatiable desire to improve each time she steps on court further enhances Barty’s role model credentials, as well as making her one to watch on day eight at Australian Open 2021.

[1] Ash Barty (AUS) v Shelby Rogers (USA)
Women’s singles, fourth round, Rod Laver Arena, night session, first match (from 7pm AEDT)
Barty defeated world No.57 Rogers during her Yarra Valley Classic title-winning run last week, overcoming the 28-year-old American in a close quarterfinal. “It’s always exceptionally tough against Shelby,” notes the 24-year-old. “She’s got the ability to take the game away from you, she’s got the ability to give you no control out there.” Barty is aiming to become the first Aussie woman to reach three consecutive Australian Open singles quarterfinals since Wendy Turnbull (who made five between 1980-1984).
Head-to-head record: Barty leads 2-0
Last meeting: Barty won 7-5 2-6 [10-4] (Melbourne Summer Series, February 2021)

[WC] Marc Polmans (AUS)/Storm Sanders (AUS) v [WC] Andrew Harris (AUS)/Ellen Perez (AUS)
Mixed doubles, second round, Court 13, third match
One Aussie team is guaranteed to progress to the quarterfinals – the question is, which one? Polmans, 23, and Sanders, 26, are aiming to match their career-best result, having advanced to the Australian Open 2018 quarterfinals together. Harris, 26, and Perez, 25, are already enjoying a career-best run.

[WC] Max Purcell (AUS)/Arina Rodionova (AUS) v [2] Robert Farah (COL)/Nicole Melichar (USA)
Mixed doubles, second round, Court 13, fourth match
Purcell and Rodionova are proving why they are two of Australia’s highest-ranked doubles players (at world No.40 and No.70 respectively), winning their opening round in straight sets. Today they face a bigger challenge against world No.1 Farah and world No.11 Melichar.