Utilising her trademark weapons superbly, Ash Barty defeats Ekaterina Alexandrova to progress to the fourth round of the Australian Open. 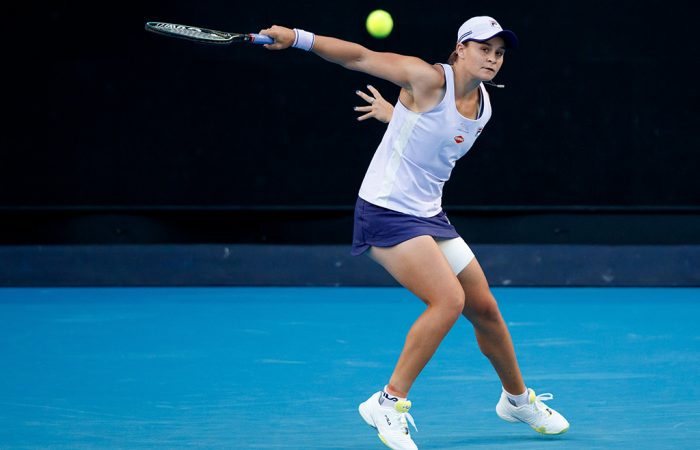 Could the 2021 season have started in a more perfect fashion for Australia’s Ash Barty?

After lifting her ninth singles trophy at the Yarra Valley Classic last weekend, the world No.1 has secured her place in the Australian Open fourth round with a 6-2 6-4 victory over Ekaterina Alexandrova.

It took Barty an hour and 20 minutes to overcome the Russian, who she’d never previously faced on tour.

Barty was right to be nervous against the big-hitting Alexandrova, a recent winner over world No.2 Simona Halep and reigning Roland Garros champion Iga Swiatek.

The powerful hitter seemed equally fearless in her first-ever meeting with a world No.1, breaking the Barty serve in the opening game and consolidating to take a 2-0 advantage.

But alongside her trademark variety, the Queenslander also possesses remarkable composure and a sharp strategic mind – she soon combined all those skills to dismantle her 26-year-old opponent.

Recovering the break in the fourth game of the 39-minute first set, Barty emphatically seized momentum. With a comfortable service hold to open the second set, the top seed assembled a run of seven straight games.

“I think it is always an adjustment period. I’ve never played her before, never hit with her before and the start was was pretty good,” Barty related.

“It’s good ball striking. I just needed to try and figure out where I wanted to place the ball and change my patterns a little bit, but certainly happy with the run I was able to get on and then a really good last few games.”

It wasn’t complete control for Barty, who also needed to claw a service break back midway through the second set. But the level-headed local did so easily, her famous backhand slice particularly damaging tonight.

“It’s always a shot I’ve enjoyed being able to learn and kind of develop over time where I can manoeuvre the ball around the court,” said Barty of her favourite weapon.

“That was going to be a big point of difference for me tonight. It was something Tyz (coach Craig Tyzzer) and I spoke about, that we were going to go ahead and try to use that slice as often as possible, not only to change up the tempo of the match but also put the ball in different positions.”

Barty will be keen to utilise those court smarts in the fourth round against American Shelby Rogers, who she defeated in the quarterfinals of the Yarra Valley Classic last week.

The Australian will do so having navigated the new experience of a crowd-free arena.

“It’s something I’ve never experienced before ever in my life, so it’s very strange and we had to have a bit of a chat about it with my team obviously just to prepare and try and be ready for anything,” she said.

Yet another example of Barty’s ability to adapt to numerous challenges – sounding another warning that an Australian Open trophy to match her Roland Garros 2019 silverware is within reach for the world No.1.