World No.1 Ash Barty wins an all-Aussie battle against Daria Gavrilova to advance to the third round at Australian Open 2021. 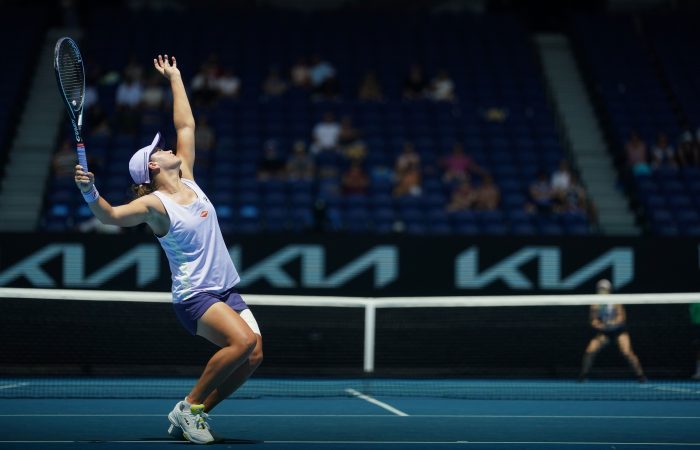 It has been 43 years since a local woman won the Australian Open women’s singles title.

Ash Barty is one step closer to ending that drought – but her second-round victory today has come at the expense of fellow Aussie Daria Gavrilova’s chances.

The world No.1 recorded a 6-1 7-6(7) victory against her 26-year-old compatriot at Rod Laver Arena this afternoon.

After losing only 10 points in a ruthless opening-round victory earlier this week, Barty was forced to fight harder today.

Gavrilova elected to receive and broke in the first game. A poised Barty, playing a fellow Australian in a Grand Slam singles match for the first time in her career, refused to panic and reeled off the next six games.

The 24-year-old was overpowering Gavrilova, hitting nine winners to three in the opening set. She was also dominating on return, winning every point on the world No.387’s second serve.

Gavrilova, however, refused to let this relentless pressure dim her fighting spirit.

Barty won the next five games and twice had an opportunity to serve for the match, but was unable to close it out.

“I was doing the right things to get to 5-2 to give myself a chance to serve out the match. Just lost my way a little bit,” Barty said.

“I haven’t played a lot of tennis over the last 12 months. Obviously going to have ebbs and flows, not only in your concentration, but your level of play as well.”

The world No.1 managed to steady, holding serve to take the second set into a tiebreak.

Gavrilova continued to fight and earned two set points in the tiebreak. But in the end, Barty had too many answers and closed out victory after 92 minutes on court.

Barty, who is now through to the Australian Open third round for a fifth consecutive year, was full of praise for her Billie Jean King team-mate after the match.

“She’s had a bit of a tricky run with injury over the last 18 months or so, so it’s just nice to see her back out here and competing,” Barty said.

The result extends Barty’s winning streak this summer to six matches and sets up a third-round clash with No.29-seeded Russian Ekaterina Alexandrova.

Barty and Sam Stosur, who plays her second-round match tonight, are the last remaining Australians in the women’s singles draw.