Australian men have made an impressive start at the Murray River Open, with Alex Bolt, Jason Kubler and Harry Bourchier all progressing to the second round. 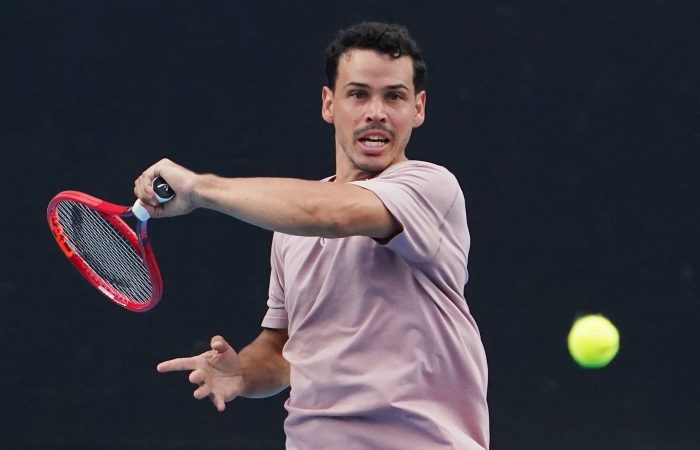 Alex Bolt, Jason Kubler and Harry Bourchier have all advanced to the second round at the Murray River Open.

Bolt won a three-set showdown against fellow South Australian Thanasi Kokkinakis, fighting back to record a 2-6 6-4 6-3 victory in the ATP 250 tournament at Melbourne Park.

The pair spent the preseason training together and were disappointed when the draw pitted them against each other.

“First thing I did was message Thanasi and was like, ‘How’s the draw?'” Bolt said of his reaction. “No one really likes playing their mate. I would have much preferred to play someone else, but that’s the way it goes sometimes.”

After scoring his first tour-level victory since last year’s Australian Open, Bolt was most pleased with his comeback from a slow start.

“I probably started off a little bit erratic, not as good as I’d like to,” Bolt said. “I guess that’s all part of it, not having played for so long. Once I sort of found my range, I felt like I got on top of the match.”

Earlier in the day, No.265-ranked wildcard Kubler scored one of the biggest-ever wins to eliminate ninth-seeded Italian Lorenzo Sonego.

“It means a lot,” Kubler said on the importance of his win, his second career victory over a top 50-ranked opponent. “He’s such a great player. I got sent some of the matches he’s played to scout him out a little bit and a lot of them were from deep in tournaments against top 10, top 20 players. It’s good for my confidence, especially after injury, to know I’m heading in the right direction. I think I can improve a lot of things, but it’s a little pat on the back.”

The 27-year-old from Queensland, who had elbow surgery last year, admitted early nerves hampered him in the first set.

“As soon as I realised I don’t need to hit everything perfect and in the corners to stay in a point, then that calmed me down and I started making a lot more balls,” he said.

Although buoyed by his sensational win, the former world No.91 is keeping his expectations measured ahead of a second-round meeting with world No.72 Ricardas Berankis.

“As long as I can go out there and try my best, we’ll see what happens,” Kubler said. “If I can get another win, I’m going to be ecstatic.”

The 25-year-old Bourchier entered the draw as an alternate, learning of his late promotion this afternoon. He made the most of the opportunity, defeating fellow Aussie Marc Polmans at Margaret Court Arena this evening.

The world No.324 now awaits the winner of the first-round clash between Australia’s Nick Kyrgios and France’s Alexandre Muller, which will be played tomorrow.