US Open: Kyrgios cruises into round three

Nick Kyrgios sets up a third-round clash with in-form Andrey Rublev after his second consecutive straight-sets win at Flushing Meadows. 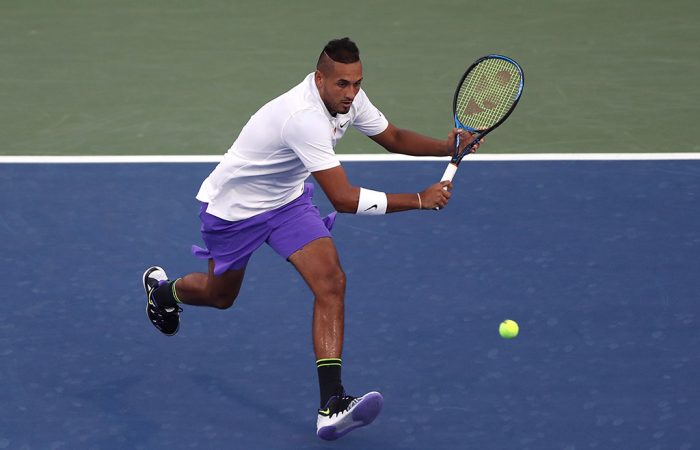 Nick Kyrgios’ straight-sets win on Thursday means Australia now has three players in the last 32 of the US Open men’s singles.

Yet Thanasi Kokkinakis is not one of them, after the wildcard suffered yet another heartbreaking injury setback ahead of his scheduled second-round meeting with Rafael Nadal.

Kyrgios notched a comfortable 6-4 6-2 6-4 win over French wildcard Antoine Hoang, his second consecutive straight-sets win after dismissing Steve Johnson in round one.

The 28th seed broke Hoang, the world No.104 making his US Open debut, in the very first game of the match and never looked back.

Kyrgios next plays Russian Andrey Rublev on Saturday for a place in the last 16, and could meet countryman Alexei Popyrin in the fourth round after the fast-rising 20-year-old continued his superb first full season at the slams with a valiant four-set win over world No.47 Mikhail Kukushkin.

Also advancing to the third round was Alex de Minaur, a straight-sets winner over 31st seed Cristian Garin earlier on Thursday.

When he faces Rublev, Kyrgios will attempt to progress to the fourth round at Flushing Meadows for the first time.

“New York has a fair few distractions, so I am trying to stay away from that,” Kyrgios said. “I want to really try and strap in and do well this week. I am just trying to stay focused.”