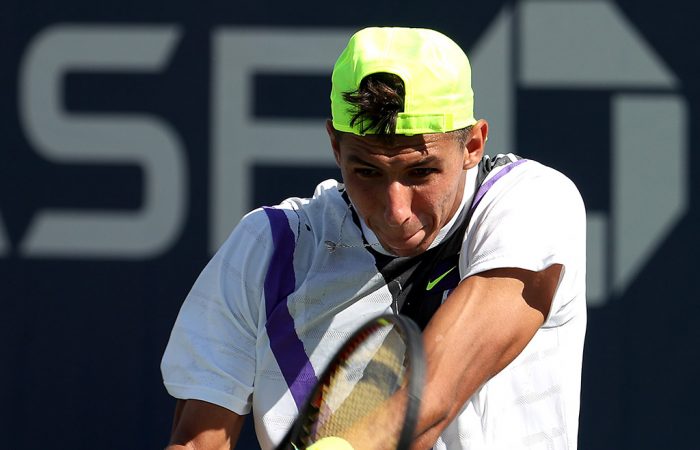 Alexei Popyrin has joined fellow 20-year-old Australian Alex de Minaur in the third round of the US Open with a fighting four-set win over Mikhail Kukushkin.

Popyrin, a former Grand Slam junior champion, fought back from a set and a break down to defeat Mikhail Kukushkin 2-6 7-5 6-3 6-2 and set up a date with big-hitting Italian Matteo Berrettini.

Popyrin, who ousted world No.4 Dominic Thiem en route to the last 32 of the Australian Open and also won matches at the French Open and Wimbledon, is enjoying a stunning first full season at the Slams.

His latest victory, after dropping the first four games and then falling behind 4-2 in the second set, will send the 2017 Roland Garros junior champion from outside No.105 in the world to inside the top 90.

Another win at Flushing Meadows and Popyrin will be headed for uncharted waters – the last 16 of a major and a possible all-Australian showdown with Nick Kyrgios, who later on Thursday beat French qualifier Antoine Hoang in straight sets.

WATCH all the best US Open action LIVE, FREE & in HD on @SBS from September 4-9 & live streamed via @SBSOnDemand – https://t.co/7tBBzO40XY pic.twitter.com/sxPFl34ZVH

Popyrin struck 44 winners to Kukushkin’s 23, including 15 aces, and broke the Kazakh seven times during the two-hour, 35-minute match-up.

“I’ve always had the fight in me since I was a kid, ever since I started playing tennis,” Popyrin said.

“You’ve got to find a way to win and that’s interesting to me and I really enjoy doing that. It’s good to finally like show people what I can do.”