De Minaur storms into US Open third round 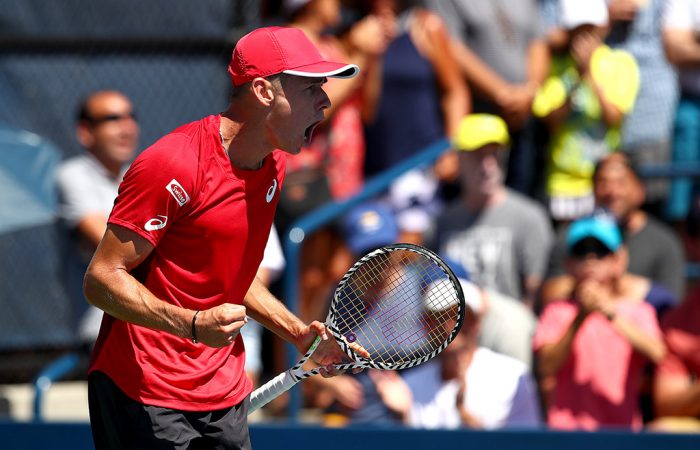 Alex de Minaur made up for lost time with a scorching second-round win at the US Open.

In a rain-interrupted match resuming from Day 3, De Minaur returned on Thursday to to complete a 6-3 7-5 6-3 victory over Chile’s 31st seed Cristian Garin.

In other Australian results, Jordan Thompson and Ajla Tomljanovic fought hard before bowing out to a pair of seeds.

De Minaur was holed up at Flushing Meadows for more than six hours on Wednesday, only to get one game in before play was suspended.

But the Australian No.2 shook off the disruption and to post an impressive win to earn a shot at seventh-seeded former Open finalist Kei Nishikori on Friday.

“Very pleased with that,” de Minaur said. “Look, it’s not easy, especially with what happened yesterday, to come back again today and to play at a very high level, which I did throughout the whole match.

“I fought off some very tough games on my serve and I managed to hold on to that second set, which was huge.

“I put myself in tough situations today and got myself out of them, so very happy.”

Nishikori, runner-up to Marin Cilic in 2014 after taking out Novak Djokovic that year in the semifinals, holds no fears for De Minaur.

“I will go out there and just play fearless. Ultimately, that is when I play my best tennis,” the 20-year-old said.

“I can draw a lot of good feelings from last year. I had a very tough match against Cilic and I just went out there and took it to him.

“Obviously it was a little bit of a (five-set) heartbreaker but ultimately that is the way I have to play and that is what you want. You want to be playing these top guys at the top of their level.

“Hopefully I can really come out tomorrow and give it my best crack.”

Thompson will rue not closing out the opening set from 5-2 up and then dropping the second in a tight tiebreaker.