Shattered Kokkinakis vows to fight on

An "angry and frustrated" Thanasi Kokkinakis has again succumbed to injury -- this time ahead of his blockbuster clash with Rafael Nadal at the US Open. 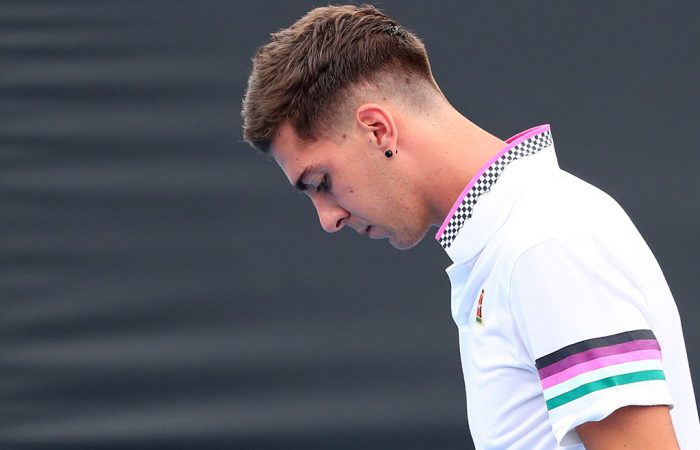 Thanasi Kokkinakis is shattered after yet another setback cut short his US Open just as he was set for the sport’s big stage again.

Kokkinakis was scheduled to take on Rafael Nadal in the feature night match on Thursday but pulled out fearing he would tear a pec muscle for the third time this year if he played.

The injury-plagued star battled for almost four hours on Tuesday to beat Ilya Ivashka in four sets in what was the 24-year-old’s first main-draw win at a Grand Slam event since the 2015 French Open.

“I’m filthy about it. Very disappointing. Obviously (it was) such a high from the other night,” Kokkinakis said.

Kokkinakis said he woke up sore on Wednesday morning and ran out of time.

“I was hoping it was just the day after I’d struggle, but I woke up today and it wasn’t much better. Went for a warm-up and it still didn’t feel great,” he said.

“I was trying to make a last-minute decision whether I’d go out there and play or give it a crack and see what happens after a few games, but I made that mistake in Australia and it just got worse after that.

“So I didn’t want to re-tear the same injury and put myself behind a month. I think I made the smart call, but I’m pissed off. Maybe I’m just not ready for Grand Slams yet. It’s a tough pill to swallow.”

The former Australian Davis Cup hero has endured a cruel run with injury ever since undergoing shoulder surgery on his right serving arm at Christmas in 2015.

Since then, Kokkinakis has suffered from elbow and knee injuries, lingering osteo pubis, his pec issues and torn oblique and abdominal muscles.

“I am pissed off and the worst part about it is walking down through the locker room. People see my head down and I haven’t even played the match,” he said.

“So they don’t know the news and they think ‘What is wrong with this guy?’. That’s the tough part. I hate being around tournaments where I know I can’t compete. It is really frustrating.

“I don’t quite know what to do to get over it at the moment.”

But he promised to again bounce back.

“I think I’m on the right track. I’m starting to play. At least I played the last month, which is baby steps for me,” Kokkinakis said.

“I’m hoping I can still play a decent amount of tournaments at the back end of the year.