Australia's men went a stunning eight-from-eight on Day 1 of Wimbledon qualifying at Roehampton. 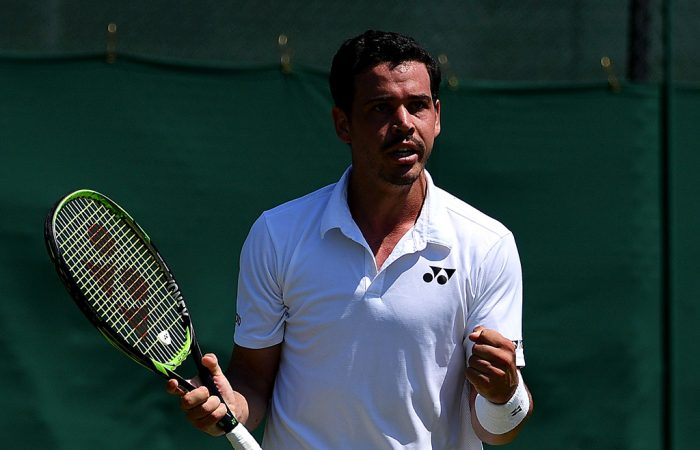 On an exceptional day for Australia at Roehampton, all eight first-round starters progressed to the second round of Wimbledon qualifying.

James Duckworth was the first of the Aussie contingent safely through, and as Monday unfolded he was joined by Andrew Harris, Marc Polmans, Akira Santillan, John-Patrick Smith, Alexei Popyrin and Jason Kubler.

Alex Bolt rounded out the day’s action by beating Italian whizkid Jannik Sinner in an epic.

Trailing by a set and a break, the South Australian rallied to win 2-6 7-5 12-10, letting out an almighty roar when he sealed victory after two hours and 36 minutes.

“I would say (the feeling was) relief, really, got out of jail free card there. I really don’t know how I won that,” said Bolt, who qualified for Wimbledon last year.

“He played some quality tennis and I somehow just weathered the storm.

“He’s ridiculous. For a set and a half he completely outplayed me and I couldn’t have a play on the ball, he was by far the better player on court. If he can just keep that level for longer periods of time he’s going to be a very good player.”

Earlier, Duckworth raced through the opening set before a tighter tussle ensued with Jan Choinski.

“It always tough your first match, a few nerves. The court was fresh, hasn’t been played on, was a little bit slippery,” he said. “I probably dealt with those conditions a little bit better than what he did, having played probably a few more grass-court events than he has.

“I strained my adductor just landing on a serve (at Roland Garros), so I’ve gotten over that, which is good, did quite a bit of rehab on that, missed about three weeks.

“I feel like I’m slowly getting a little bit better, played a couple of good matches last week in Ilkley and I’m hoping to improve every match.”

On the very next court, Harris raced through the first set in just 22 minutes and from 3-5 down in the second set stormed to a 6-2 7-5 win.

It’s the first time the Victorian is playing at Wimbledon since winning the junior boys’ doubles title. And, incredibly, 2019 marks the first time Harris has played on grass – he played the Surbiton Challenger before coming to Roehampton – since he played an ITF Futures event at Ilkley in July 2012.

“I played one loose point in the 4-3 game then he broke me. I just kept my cool and then really locked in in that 5-3 game and just got on a roll and closed it out really nicely,” he said of his first-round qualifying win.

“I was really excited (coming here). I mean, it really helped having my coach (Jarryd Maher) here – it’s the first time pretty much all year to have my coach. We just talked about controlling your emotions more, because I was pretty anxious yesterday.

“Just more excited; this is my first Wimbledon, I really want to do well. So it was more just about staying in the moment and controlling my emotions and I think I did that really well today and stayed really relaxed and played well.”

Both Polmans and Santillan have played twice in Wimbledon qualifying, and they had fallen in the first round both times previously.

That changed on Monday when both charged through their opening-round matches at Roehampton.

Polmans arrived at match point against Egypt’s Mohamed Safwat and went for his shots, leaning into a backhand return and taking charge of the point to seal a 6-1 6-3 victory.

“Last year I had a tough loss, 8-6 in the third and a few match points. I’m just happy I was able to take the match point this time around,” Polmans laughed.

“But also I’m happy with how I played today. I like playing on grass – I’m not sure it’s the best surface for my game style but I do enjoy playing on it, so that’s the main thing.

“I played last week in Ilkley, tried to get one match on grass before I came here, and I ended up losing to the eventual winner. So I feel like I’m playing well on the grass and moving well.”

Santillan ripped through his 6-3 6-1 win over Jurij Rodionov in just 41 minutes to set up a second-round meeting with Ruben Bemelmans.

By this point, Santillan was the fourth Australian through the the next round, and said he was well aware of his compatriots’ success.

“I think all of us play really good on grass. I mean we’ve got a good game for grass, pretty crafty, big serves,” he observed.

“So all of us can definitely play on grass. I’m expecting good things from all of us.”

Popyrin thriving on the lawns

Seeded fourth in qualifying and with 1987 Wimbledon champion Pat Cash now in his corner, Popyrin’s big serve and frequent charging of the net proved decisive. 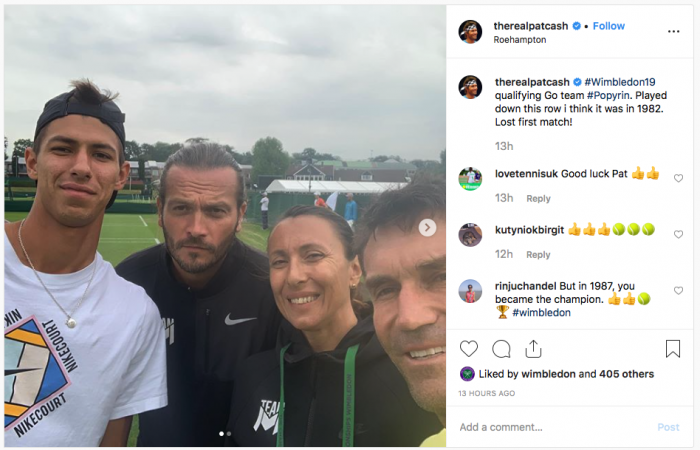 “It’s been going great actually. He’s a former Wimby champ so obviously he’s got a lot to add, lot to say to my game,” Popyrin said of Cash.

“Definitely the volleys, changing up the rhythm on my serve, all that stuff. He comes in and he helps a lot – he’s got a great intuition.”

Until 2019, Popyrin had not played a match on grass since playing Wimbledon juniors in 2016.

But a strong season on the ATP Tour – this week has seen him crack the top 100 – helped his belief coming into Roehampton.

“Definitely feeling pretty confident, I like the grass. Didn’t have the best result at Queen’s but definitely felt confident after the training week that I had,” he said.

“(Based myself) in London, training at Queen’s, training here (at Roehampton) just before the tournament started. Felt pretty confident going into the match and I think I played pretty well today.”

Smith and Kubler both Both qualified for Wimbledon last year, and they extended their Roehampton winning streaks to four with wins on Monday.

Smith faced a tough draw against Nicolas Mahut, who last week reached the quarterfinals at Queen’s and the third round at Roland Garros before that. Yet the Queenslander raced to a 6-3 6-4 win in just 61 minutes.

“My first Slam I qualified here. I love playing out here, everyone’s so close,” Smith said.

“When I saw the draw I thought, ‘If I serve well, I can beat anyone.’ It’s just one of those matches that if you get through, hopefully you can keep building momentum. Obviously the pressure’s on him, I just gonna come out and have a swing, it doesn’t matter who I play.

“It’s just gonna be another match tomorrow (against Salvatore Caruso) and if I serve well again, I can go far in this tournament.”

Kubler also had a tough draw in No.2 seed Henri Laaksonen.

“Obviously it’s a big moment (when I was trailing by that score) so you want to play well, but I found throughout the match whenever I was down sort of 15-30 or 0-30, I was able to get out of those situations,” Kubler said.

“So I was just telling myself make some first serves. I felt comfortable when I was making them.

“I don’t even remember that I won the last 12 points.”