Barty targets No.1 in Birmingham

Ash Barty returns to action at this week's Birmingham Classic, one of several Aussies playing on grass around Europe in the lead-up to Wimbledon. 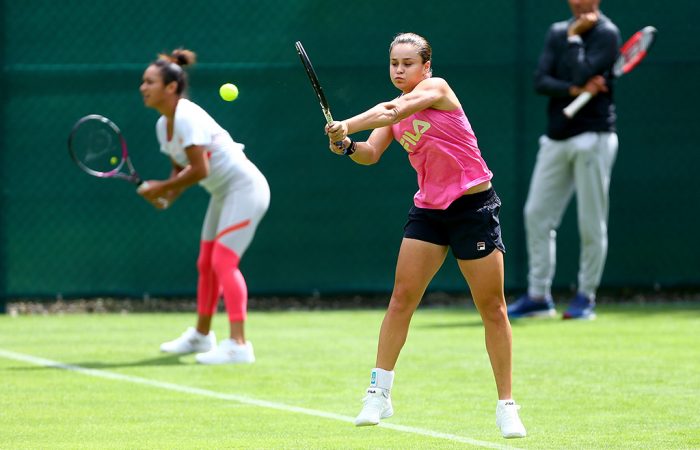 Ash Barty could ascend to world No.1 with a strong showing this week on grass in Birmingham.

The Australian will play her first event since winning the French Open, and is the No.2 seed behind top-ranked Naomi Osaka.

Barty, who faces a tough opening-round assignment against last week’s Nottingham grass-court finalist Donna Vekic, needs to win the Birmingham title and hope that Osaka does not go beyond the semifinals.

Should Barty reach the final without winning the title, then Osaka must lose in the first round to Maria Sakkari for Barty to surpass her.

Another Aussie, Astra Sharma, will aim to join Barty in the main draw when she plays her final-round qualifying match against Lauren Davis on Monday. Sharma beat Sarah Beth Grey and Danielle Lao in earlier qualifying rounds.

Also playing on Monday will be West Australian Matt Ebden, who takes to the court in Halle – where he reached the quarterfinals last year – against Radu Albot.

John Millman has been handed the toughest of first-round assignments, drawing nine-time Halle champion and No.1 seed Roger Federer.

At Queen’s Club, Nick Kyrgios returns to the tournament where he reached last year’s final, and opens against Adrian Mannarino, who yesterday beat Jordan Thompson to win the grass-court title in ‘s-Hertogenbosch.

In a loaded section of the draw, the winner of Kyrgios-Mannarino will take on the winner of Grigor Dimitrov v Felix Auger-Aliassime.

Alex de Minaur is also in the field, taking on qualifier Aljaz Bedene in the first round.

Meanwhile, Aussies Sam Stosur – a semifinalist in 2018 – and Ajla Tomljanovic are among the draw at the WTA grass-court tournament in Mallorca.