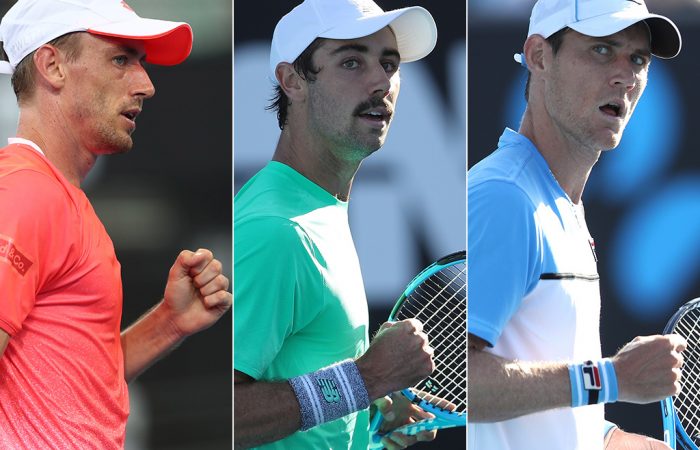 A rejuvenated Jordan Thompson has won just his fourth match at a major in 18 attempts, thumping veteran Spaniard Feliciano Lopez in straight sets on day one of the Australian Open.

John Millman was another winner on the opening day, beating Argentine Federico Delbonis 6-3 3-6 7-6(3) 6-2 to reach the second round.

“He’s a tricky customer. Lefty. Big swinging serve. So it was always going to be tricky but I made a bit harder job of it than I probably should have,” said Millman. “I got through and I’m happy.”

If you ever need a selfie taken, just ask @johnhmillman 🤳👑#AusOpen pic.twitter.com/BxRxkd8LyK

Milliman will face 22nd seed Roberto Bautista Agut in the second round as he looks to replicate his best result at his home slam, a third round appearance.

“I feel like I have been playing good tennis,” he said. “Especially last year and even this year in Brisbane and Sydney I thought I was striking the ball pretty well.

“I have come into the Open confident. The next match, whoever I play will be really tough. So I’m looking forward to it.”

The 24-year-old Sydneysider Thompson won 6-1 7-6(7) 6-3 on Monday, setting up a second-round clash with either American Steve Johnson or Italian Andreas Seppi.

“I hadn’t been here too many days coming from Sydney and hadn’t had too many hits on the court. But I played solid.”

Thompson battled a crisis of confidence in the latter part of 2018 and returned to find his groove at the second-tier Challenger level, where he finished the year with titles in Traralgon and Canberra and a 10-match winning streak.

“It gave me plenty of match fitness. To win matches back-to-back … it restored confidence,” he said.

“It’s getting better every match I think. Whether I win or lose, I feel more comfortable on the court.”

The world No.72 also reached the quarterfinals at last week’s Sydney International before bowing out to countryman Alex De Minaur.

.@alexdeminaur is loving every minute of the Australian summer ☀️

"To feed off the energy of the crowd. I mean, the support I've been getting has been amazing. Just makes you want to go out there, compete and have fun."#AusOpen pic.twitter.com/1EOscez5l4

Another Aussie, Matt Ebden, bounced back from a forgettable first set to run out a four-set winner over Jan-Lennard Struff of Germany.

Nadal accounted for Australian wildcard James Duckworth at Rod Laver Arena, winning 6-4 6-3 7-5 for his first victory since the US Open in September.

Kubler, who endured an injury-interrupted build up to the Australian Open, lost 6-4 7-6(1) 2-6 6-3 to Italy’s Thomas Fabbiano, while 21-year-old Polmans led Denis Kudla by two sets to love before falling in five.