The Australian No.1 arrived in Melbourne having clinched a first ATP title at the Sydney International on Saturday. 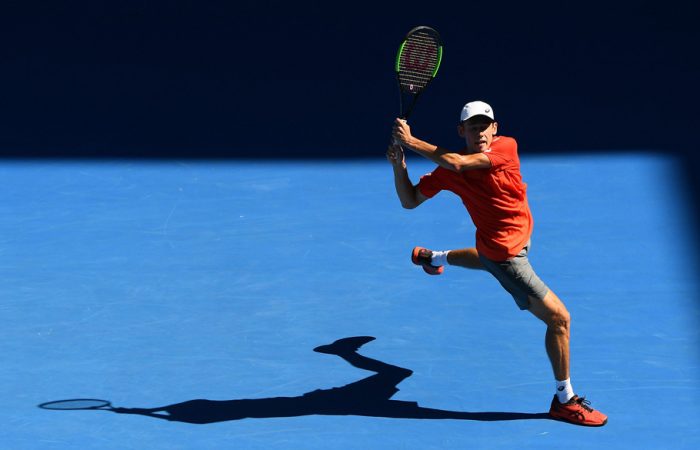 The teenager prepared for his home Grand Slam by lifting a maiden ATP title at the Sydney International on Saturday and maintained his momentum at Melbourne Park.

“I’m really happy with my performance today. I had to be really tough and to back it up from Sydney, I’m really proud I was able to get it done in three sets,” said De Minaur during his on-court interview.

The 27th seed made a sharp start and broke to love at 2-2, before a rapid hold to love launched De Minaur ahead.

An acrobatic backhand smash in mid-flight was the catalyst as the Aussie teenager wrapped up a confident first set.

The top-ranked Aussie never looked out of control and soared into the second round to face qualifier Henri Laaksonen or Mirza Basic.

There was time for a light-hearted moment, with the 19-year-old reflecting on recently picking up his driving license.

“I must say, if you see me out driving, you want to watch out,” joked the 27th seed. “I got the license a couple of months back, I’m very happy about that and it’s probably one of the biggest wins of my career.”

Next up for De Minaur is Swiss qualifier Henri Laaksonen, who navigated past Bosnia’s Mirza Basic in four sets.

“Yeah, this is my second time in the second round. I think I’m a completely different player from a couple years ago,” insisted De Minaur, who burst onto the scene after toppling Gerald Melzer in the first round over five sets in 2017.

“Really looking forward to going out there, coming back, just having fun. I think that’s the main thing. To feed off the energy of the crowd. I mean, the support I’ve been getting has been amazing. Just makes you want to go out there, compete and have fun.”

The teenager flew straight to Melbourne following his scintillating week in Sydney, having prevailed in both the semifinals and final on Saturday, but the youngsters is still feeling fresh.

“The body’s feeling good. I mean, this is why you put in the hard yards in the pre-season, to be able to back it up day in and day out,” added De Minaur. “I’m very happy with the effort I put in in the pre-season. It’s good to see the work paying dividends right now.”