It was a great start to the week for Australia's women, with Daria Gavrilova and Sam Stosur enjoying grass-court wins and Ajla Tomljanovic qualifying in Mallorca. 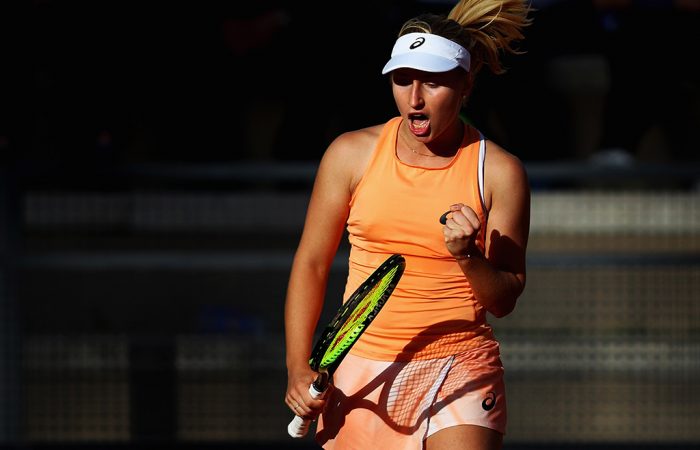 Daria Gavrilova held off the ever-tricky challenge of Dominika Cibulkova to get off to the perfect start at the WTA event in Birmingham.

Gavrilova, a quarterfinalist at the same event last year, completed a 6-3 7-6(6) win in one hour and 45 minutes over the former world No.4, and extended her head-to-head record over Cibulkova to 2-1.

Gavrilova was unable to convert three match points in the 12th game and then stared down two set points in the tiebreak before eventually prevailing.

Impressively, Gavrilova has now won seven of the eight tiebreaks she’s contested in 2018.

Next up for the Australian at the grass-court tournament is the winner of the blockbuster first-round match between defending champion Petra Kvitova and British No.1 Johanna Konta.

Meanwhile, Sam Stosur and Ajla Tomljanovic enjoyed winning Mondays, both recording straight-sets victories on the lawns of the Mallorca Open.

Stosur, who has historically struggled on grass, beat emerging Czech lefty Marketa Vondrousova 6-2 7-5 after having trailed 3-5 in the second set.

.@bambamsam30 completes the win over Vondrousova!

As that was happening, Tomljanovic brushed aside Anna Blinkova 6-4 6-3 to take her place in the main draw, where she will take on Poland’s Magda Linette.

Stosur, who finished with 23 winners to 16 unforced errors against Vondrousova, will in the second round face either Carla Suarez Navarro or Lara Arruabarrena.

At the grass-court Challenger event in Ilkley, Akira Santillan emerged victorious in an all-Australian battle over Marc Polmans to take his place in the main draw.

Santillan won 6-4 6-4, his third straight qualifying victory in Ilkley, while compatriot John-Patrick Smith was not so lucky; the Queenslander fell in the second round of qualifying to Noah Rubin in straight sets.

At the concurrent women’s ITF event at the same venue, Jaimee Fourlis continued her barnstorming progress through qualifying with a 6-1 6-0 win over Brit Emily Appleton.

Fourlis, who made her top-200 debut this week, in the first round beat fellow Aussie Abbie Myers for the loss of just three games.

Fourlis stands one win from the main draw of the $100,000 tournament and will next take on either Bianca Andreescu or Asia Muhammad.

On Tuesday, Aussie tennis fans are in for a treat when Nick Kyrgios takes on Andy Murray on the centre court of Queen’s Club.

It will be Murray’s first match in almost 12 months, with the Brit having struggled with a chronic hip injury requiring surgery.

Kyrgios has battled injury problems for much of the year himself, before last week turning a corner with a semifinal run on grass in Stuttgart.

Millman qualified for the main draw at Queen’s and will present a tough challenge for the Serb, who is still searching for the form that delivered him his last Grand Slam title two years ago.

Nottingham champion Ash Barty will look to extend her grasscourt winning streak when she takes on French qualifier Oceane Dodin in the first round in Birmingham on Tuesday.

Barty reached the final in Birmingham last year, where she fell to Kvitova.

Matt Ebden, meanwhile, will play Malek Jaziri in the first round of the ATP 500 grass-court event in Halle while Aussies Jordan Thompson and Jason Kubler will take to the courts at the Ilkley Challenger.