Nick Kyrgios reveals he is in a good head space as the grass court season begins. 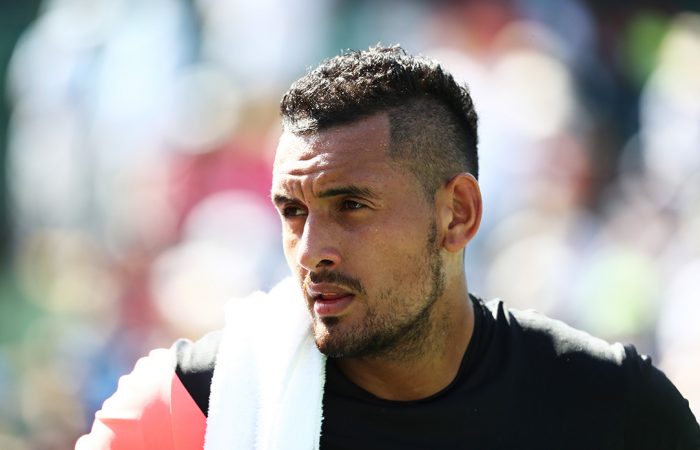 Australian Nick Kyrgios has declared he is ready to return to singles.

The world No.23 will compete in an ATP World Tour tournament on grass in Stuttgart next week, his first competitive singles appearance since being sidelined with an elbow injury in early April.

Kyrgios made a tentative return to the tour in doubles, winning his first ATP doubles title alongside American Jack Sock in Lyon on the eve of Roland Garros. But the 23-year-old decided not to compete in Paris.

“It was massive call not to play in Paris. When I saw my draw, I had the opportunity to do well,” Kyrgios said.

“But I didn’t want to put my grass-court season in jeopardy.

“I made a more mature decision this time.

“I had a lot of doctors and medical people telling me it was the smart move not to play Roland Garros.”

Kyrgios began his grass court season at an ATP Challenger tournament in Surbiton this week, playing doubles alongside American Jackson Withrow. They lost in the first round to Indian pair Siriam Balaji and Vishnu Vardhan 7-6(2) 3-6 10-6.

“It was a lot of fun just being back on court and competing,” Kyrgios said.

“At the end of the day it was just a couple of points in it. It’s tough on grass, especially in doubles.

“But I’m pretty happy with the way my elbow is going, that’s why I was playing.

“I was serving 100 per cent, and I thought I served really well. I’m ready to keep playing and play some singles next week.”

After struggling with a hip injury during last year’s grass court season, Kyrgios is optimistic about his chances of a good run in 2018.

“Grass is one of my favourite surfaces, I just want to go out there and enjoy myself.

“I haven’t been in this head space for a while where I am looking forward to going out to training and playing matches.”

There is a strong Australian contingent competing in Surbiton this week.

Arina Rodionova, Destanee Aiava, Lizette Cabrera and Priscilla Hon all feature in first round women’s singles action of an ITF tournament played at the same venue.

American Danielle Lao eliminated Olivia Rogowska last night, winning 6-4 6-4, while Jaimee Fourlis and Kimberly Birrell both fell in the final round of qualifying.