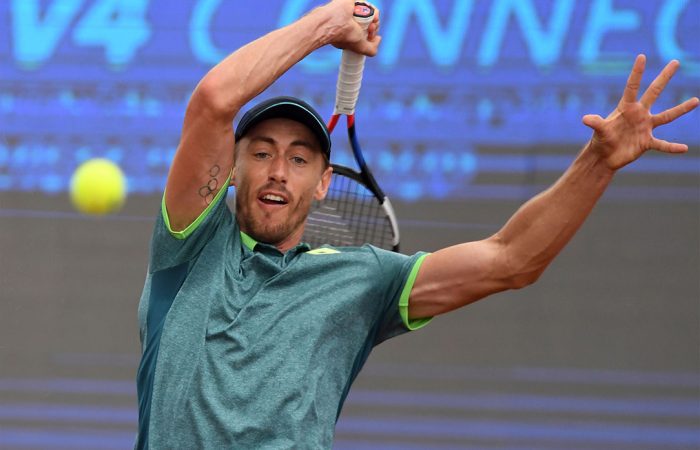 Day three of Roland Garros has a very Australian flavour, with nine players in action. This includes John Millman, James Duckworth, Sam Stosur and Daria Gavrilova all on court from 7pm AEST.

> Find out how to watch the French Open

John Millman (AUS) v [24] Denis Shapovalov (CAN)
Court Suzanne-Lenglen, first match (from 7pm AEST)
Head-to-head: First meeting
Queensland’s John Millman arrives at Roland Garros ranked No.59, his best-ever ranking entering a Grand Slam tournament. His opponent is 19-year-old Canadian Denis Shapovalov – who is also enjoying a career-best season, skyrocketing up the rankings to be seeded in a Grand Slam for the first time. The 28-year-old Millman said he was ready for a battle against his highly-touted opponent. “He’s extremely talented. He played really well in those two Masters events on clay so it’s going to be a tough match, especially being a lefty,” Millman said.

James Duckworth (AUS) v [3] Marin Cilic (CRO)
Court Philippe-Chatrier, first match (from 7pm AEST)
Head-to-head: First meeting
After a horror run with injury, the draw has not been kind to No.1072-ranked James Duckworth. The 26-year-old from Sydney, using a protected ranking of No.105 to enter, faces third seed and former Roland Garros junior champion Marin Cilic in the opening round. It is Duckworth’s first tournament since losing in Australian Open qualifying in January.

Sam Stosur (AUS) v Yanina Wickmayer (BEL)
Court 3, first match (from 7pm AEST)
Head-to-head: Stosur leads 4-2
Sam Stosur loves competing in Paris, where the 34-year-old is a four-time semifinalist and made the third round or better for the past nine years. Her ranking has slipped to world No.90, but she can take confidence into a first-round meeting with Belgian Yanina Wickmayer. Stosur owns a 4-2 winning record against the world No.105, including a win in the French Open second round in 2009.

[24] Daria Gavrilova (AUS) v Sorana Cirstea (ROU)
Court 6, first match (from 7pm AEST)
Head-to-head: First meeting
No.24 seed Daria Gavrilova, a former Roland Garros junior finalist, has a tricky first-round opponent in world No.49 Sorana Cirstea. The Romanian has a good record in Paris, with her best result a quarterfinal run in 2009. Yet Gavrilova proved her own clay prowess with a recent victory over world No.3 Garbine Muguruza in Rome.

[WC] Alex De Minaur (AUS) v [16] Kyle Edmund (GBR)
Court 3, second match
Head-to-head: Edmund leads 1-0
World No.105-ranked Alex De Minaur is set for a showdown with Kyle Edmund for the second time this month. The No.16-seeded Brit, who reached the Australian Open semifinals earlier this season, won their second round match in Estoril in May in straight sets. Yet De Minaur is determined to make the most of his wildcard and reverse the result. “I’m really looking forward to getting out there and competing and fighting hard and hopefully getting the win. I can’t wait,” said the 19-year-old.

[17] Ash Barty (AUS) v Natalia Vikhlyantseva (RUS)
Court 3, third match
Head-to-head: First meeting
Ash Barty admits clay is not her favourite surface, but her pre-tournament form was encouraging with a singles semifinal in Strasbourg last week and winning the Rome doubles title. A back injury is a concern, but Barty was optimistic after retiring in Strasbourg: “I’ve never had it before but, hopefully with recovery in the next couple of days, I’ll still be able to play.” She faces world No.81 Russian Natalia Vikhlyantseva in the opening round.

[WC] Isabelle Wallace (AUS) v Alison Van Uytvanck (BEL)
Court 5, third match
Head-to-head: First meeting
Wildcard play-off winner Isabelle Wallace is set to make her Grand Slam main draw debut. Alison Van Uytvanck, the world No.46, is a tough assignment for the No.248-ranked Wallace. The Belgian player made her big breakthrough with a quarterfinal run at Roland Garros in 2015 and will the first top 50-ranked player the 21-year-old Australian has played in her career.