Sam Stosur and Casey Dellacqua have been dealt tough draws at the WTA event in Montreal, while five Aussies line up at the concurrent Canadian men's event in Toronto. 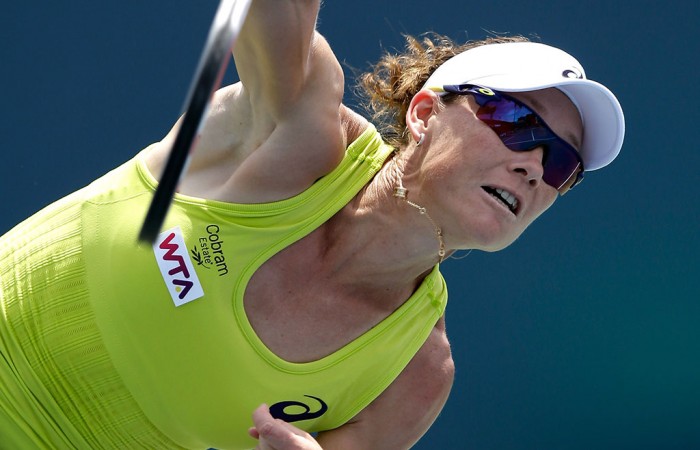 Stosur opens against qualifier Monica Puig at the prestigious Premier-level event, and would next face top seed Serena Williams in round two should she get past that first test.

Williams arrives in Montreal fresh off winning the WTA event in Stanford, California at the weekend, and beat Stosur in the Rogers Cup final three years ago when it was staged in Toronto.

Stosur recently beat Puig in comprehensive fashion in the first round at Roland Garros.

Dellacqua takes on Kirsten Flipkens in her opener, and would then line up against No.2 seed Petra Kvitova if she progresses.

Kvitova is the reigning Wimbledon champion and comes to Canada on a seven-match winning streak.

In the concurrent ATP Rogers Cup in Toronto, five Aussie men will take their place in the main draw at the Masters 1000 event.

Lleyton Hewitt and wildcard Nick Kyrgios received direct entry into the draw and were joined on Sunday by qualifiers Bernard Tomic and Thanasi Kokkinakis and lucky loser Marinko Matosevic.

Hewitt opens against Julien Benneteau, with a projected second round meeting against 11th seed Ernests Gulbis, the Latvian a semifinalist recently at Roland Garros.

Matosevic also finds himself in the bottom half of the 64-player draw along with Hewitt, and takes on Guillermo Garcia-Lopez of Spain in his first round match.

Youngsters Tomic, Kyrgios and Kokkinakis have all landed in the top half; Tomic will battle Ivo Karlovic, the Croatian whom he recently defeated in the final of the ATP Claro Open Colombia in Bogota.

The Toronto draw is bookended by No.1 seed Novak Djokovic and second seed Roger Federer.