Australian Sam Stosur has progressed to the mixed doubles quarterfinals at Wimbledon for the first time since 2014. 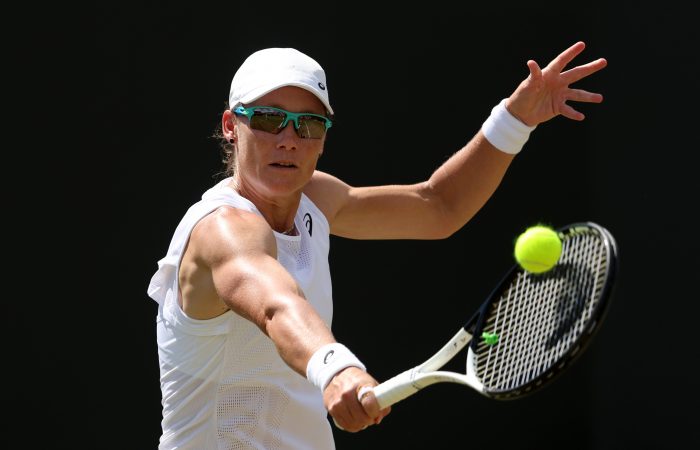 Sam Stosur’s incredible longevity is highlighted on the day nine schedule at Wimbledon 2022.

It is world No.11 Stosur’s sixth appearance in a Wimbledon mixed doubles quarterfinal – and comes 17 years after making her first. It is also the two-time champion’s deepest run at the tournament since 2014.

Stosur is one of 11 Australians in action on day nine, with several of her former doubles partners and peers featuring in invitational events for past champions and retired greats. This includes Casey Dellacqua, who is one year younger than Stosur.

[10] Ellen Perez (AUS)/Nicole Melichar-Martinez (USA) v [2] Barbora Krejcikova (CZE)/Katerina Siniakova (CZE)
Ladies’ doubles, quarterfinals, No.2 Court, first match (from 8pm AEST)
Perez, a 26-year-old from New South Wales ranked No.46, is enjoying a career-best Grand Slam run alongside Melichar-Martinez, a 28-year-old American ranked No.37. Their opponents – 26-year-old Czechs world No.3 Siniakova and world No.7 Krejcikova – are the No.2 seeds and Wimbledon 2018 champions, who are competing in their fourth consecutive quarterfinal at the tournament.

Mark Philippoussis (AUS)/Tommy Haas (GER) v James Blake (USA)/Daniel Nestor (CAN)
Gentlemen’s invitational doubles, No.2 Court, second match
With his booming serve, Philippoussis enjoyed much success at Wimbledon during his professional career. The 2003 singles finalist made his 10th and final appearance in 2006.