Alex de Minaur is among 14 Australian players scheduled to compete on day four at Wimbledon 2022. 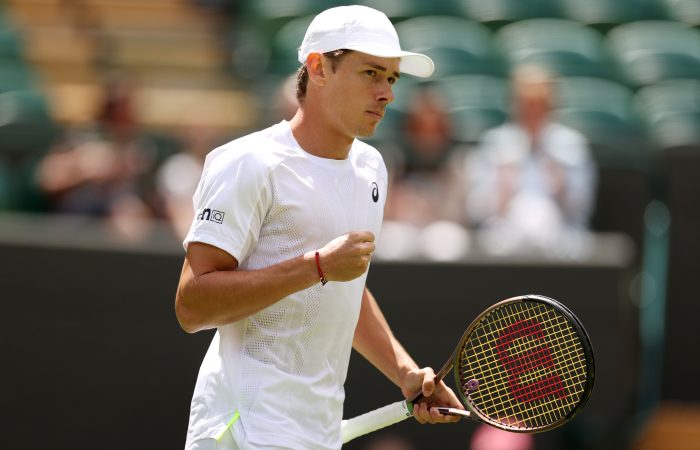 Day four at Wimbledon 2022 looms as an exciting one for Australian tennis fans.

De Minaur is one of four Aussie contenders, along with Nick Kyrgios, Jordan Thompson and Jason Kubler, still alive in the gentlemen’s singles competition.

Ajla Tomljanovic is the sole Australian standing in the ladies’ singles draw and is determined to continue her winning run when she meets American qualifier Catherine Harrison today.

“It feels like such a privilege to play at Wimbledon and I’m just grateful to have another match,” Tomljanovic said.

Ajla Tomljanovic (AUS) v [Q] Catherine Harrison (USA)
Ladies’ singles, second round, Court 15, first match (from 8pm AEST)
Tomljanovic proved her grass-court credentials by eliminating the No.18 seed in her opening round. Now the world No.44 is looking to progress to Wimbledon’s third round for the second year in a row. The 29-year-old Australian plays world No.262 Harrison. The 28-year-old American qualifier is competing in her maiden Grand Slam singles draw and facing a top 50-ranked opponent for the first time in her career.
Head-to-head record: First career meeting

Nick Kyrgios (AUS) v [26] Filip Krajinovic (SRB)
Gentlemen’s singles, second round, No.2 Court, second match
World No.40 Kyrgios has been in impressive grass-court form, winning eight of his past 10 matches. So has his second-round opponent, world No.31 Krajinovic. The 30-year-old from Serbia was a finalist at Queen’s Club earlier this month. The 27-year-old Kyrgios is looking to advance to Wimbledon’s third round for the sixth time in his career and improve a 5-6 win-loss record against seeded opponents at the tournament.
Head-to-head record: Kyrgios leads 3-0
Last meeting: Kyrgios won 6-3 6-3 (Estoril, April 2015)

[19] Alex de Minaur (AUS) v Jack Draper (GBR)
Gentlemen’s singles, second round, No.1 Court, third match
World No.27 De Minaur is looking to equal his career-best result at Wimbledon and advance to the third round for the first time since 2018. The 23-year-old Aussie will have an important edge in experience when he faces Draper, a 20-year-old Brit enjoying a breakout year. The world No.94 has won four ATP Challenger titles this season and scored his first Grand Slam match win in the opening round.
Head-to-head record: First career meeting

[Q] Jason Kubler (AUS) v [Q] Dennis Novak (AUT)
Gentlemen’s singles, second round, Court 16, fourth match
Kubler is aiming to advance to a Grand Slam third round for the first time in his career. The world No.99 is in red-hot form, having won 20 of his past 23 matches. This included a first-round upset of No.28 seed Dan Evans. The 29-year-old from Brisbane now meets a fellow qualifier, world No.153 Novak. The 28-year-old Austrian’s best major result is a third-round run at Wimbledon in 2018.
Head-to-head record: Novak leads 1-0
Last meeting: Novak won 7-6(5) 6-3 (Ilkley, June 2019)

[14] Matthew Ebden (AUS)/Max Purcell (AUS) v Andre Goransson (SWE)/Ben McLachlan (JPN)
Gentlemen’s doubles, first round, Court 7, first match (from 8pm AEST)
World No.31 Ebden and world No.34 Purcell have established themselves as one of the world’s best teams, reaching three finals so far this season. This includes their runner-up finish at the Australian Open and more recently, on grass in s-Hertogenbosch. This is 34-year-old Ebden’s eighth Wimbledon doubles campaign and 24-year-old Purcell’s third.

Astra Sharma (AUS)/Ulrikke Eikeri (NOR) v Alison Riske (USA)/CoCo Vandeweghe (USA)
Ladies’ doubles, first round, Court 10, second match
Sharma is competing in Wimbledon doubles for the second time in her career. The 26-year-old from Perth, who is ranked No.101, is teaming with world No.43 Eikeri, a 29-year-old from Norway who was recently a Roland Garros mixed doubles finalist. They face the highly credentialled all-American combination of Riske and Vandeweghe.

Storm Sanders (AUS)/Belinda Bencic (SUI) v Dalma Galfi (HUN)/Dayana Yastremska (UKR)
Ladies’ doubles, first round, Court 5, third match
Sanders enjoyed a stunning run at Wimbledon last year, advancing to the semifinals in a career-best performance. The 27-year-old returns at a career-high world No.12. With Sanders’ regular partner Caroline Dolehide not competing at Wimbledon this year, she is instead teaming with Bencic, an Olympic doubles silver medallist, for the first time.

[12] Sam Stosur (AUS)/Latisha Chan (TPE) v Aliona Bolsova (ESP)/Ingrid Neel (USA)
Ladies’ doubles, first round, Court 8, third match
World No.11 Stosur is making her 17th Wimbledon doubles appearance. The 38-year-old, who has a 34-16 career record and is a three-time finalist at the All England Club, is partnering world No.94 Chan, a 32-year-old from Chinese Taipei. The 12th-seeded duo, who have both previously topped the doubles rankings, are looking to build on a semifinal run at Birmingham earlier this month.

Monique Adamczak (AUS)/Katarzyna Kawa (POL) v [7] Alexa Guarachi (CHI)/Andreja Klepac (SLO)
Ladies’ doubles, first round, Court 9, third match
Perseverance has paid off for 39-year-old Adamczak, who has overcome a career-threatening toe injury to resume her professional career this season. Using a protected ranking of No.70, Adamczak is making her fourth Wimbledon doubles appearance. Her partner is Kawa, a 29-year-old Polish player ranked No.91. They face world No.29 Guarachi and world No.18 Klepac in the opening round.

[10] Ellen Perez (AUS)/Nicole Melichar-Martinez (USA) v Kaitlyn Christian (USA)/Panna Udvardy (HUN)
Ladies’ doubles, first round, Court 10, third match
World No.46 Perez is seeking a first win in her third Wimbledon doubles appearance. The 26-year-old Australian is partnering 2018 finalist Melichar-Martinez, a 28-year-old American ranked No.37. The tenth-seeded duo, who have recorded three wins from their seven matches together since teaming up in May, play world No.57 Christian and world No.111 Udvardy in the opening round.

[7] John Peers (AUS)/Filip Polasek (SVK) v Mackenzie McDonald (USA)/Botic van de Zandschulp (NED)
Gentlemen’s doubles, first round, Court 9, fourth match
World No.16 Peers is making his 10th appearance at Wimbledon and looking to better a 2015 runner-up finish. The 33-year-old Peers and Slovak partner Polasek started the season strongly, winning their second team title in Sydney. However, the seventh-seeded duo have been struggling recently and have scored only a single win from their past eight matches together.

[10] Thanasi Kokkinakis (AUS)/Nick Kyrgios (AUS) v Aljaz Bedene (SLO)/Soonwoo Kwon (KOR)
Gentlemen’s doubles, first round, Court 18, fifth match
The Special Ks are teaming up at Wimbledon for the first time since scooping the boys’ doubles title in 2013. The reigning Australian Open champions have won 10 of their 12 matches together this season, propelling Kokkinakis to world No.27 and Kyrgios to world No.29 in the rankings. This is Kyrgios’ first appearance in a Wimbledon gentlemen’s doubles draw and Kokkinakis’ third (and first since 2017).