Alex de Minaur and his Davis Cup teammates will compete with pride, passion and happy memories as they aim to complete victory over Hungary in Sydney today. 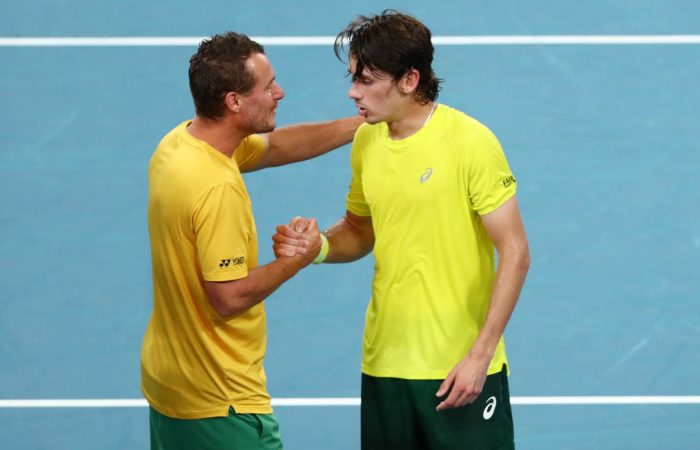 Some happy memories will drive Australian team members as they aim to secure victory over Hungary in the Davis Cup qualifier in Sydney.

The teams are locked at one win apiece, after Alex de Minaur and Marton Fucsovics – the nation’s respective No.1 players – each claimed a win at Ken Rosewall Arena yesterday.

When play resumes at 1pm today, Luke Saville and John Peers will aim to replicate the form they achieved as they paired for Australia for ATP Cup at the start of the season.

The winners of two of the three matches they contested together in January, the Australian duo demonstrated impressive on-court synergy.

For Alex de Minaur, home city Sydney is also the setting for his first career title, which he claimed at the Sydney International in 2019.

With the potential opportunity to seal victory for Australia in today’s fourth rubber, De Minaur is also buoyed by the passion that reignited when he returned to Ken Rosewall Arena yesterday.

After a straight-sets victory over Zsombor Piros, the Australian spoke of his love for competing in the Davis Cup setting.

“It’s something different playing for your country,” said the 23-year-old. “I mean I’ve played plenty of matches on that court, and even ATP Cup matches, but Davis Cup it just hits different. For every sort of reason.”

“You’ve always got a bit more pressure out there, it means a little bit more. You don’t want to let your teammates down and you just want to go out there and get the job done.”

That passion is magnified at Ken Rosewall Arena this week, with the legend himself watching from the front row.

De Minaur has long held a connection to the Australian great, explaining yesterday that he had watched many of Rosewall’s famous matches as a child after his father recorded them to watch on video.

“I’ve been fortunate enough as well to be able to spend a bit of time with him,” De Minaur added.

“We had him join us for dinner a couple of nights ago … you just enjoy every part of it and I must say Ken is one of the most modest guys out there, so he doesn’t like talking about himself too much, or his accolades in the tennis.

The spirit gleaned from those experiences will again be on show in today’s singles encounter with Fucsovics.

In the only other match he contested against the No.1 Hungarian, in the round-robin stage of the 2021 Finals in Italy, De Minaur fought for over three hours to secure a three-set win.

Fucsovics carries a heavy workload in Sydney, with the Hungarian scheduled to face De Minaur after contesting the doubles.

“He obviously is going to try and do absolutely everything in his power to get the win for his team and his country and good on him,” said Australian team captain Lleyton Hewitt.

“But I know one thing for sure – Alex won’t be making it easy for him in that fourth match.”