An appearance in a Davis Cup team is worth the wait for Luke Saville, who becomes the 113th man to represent Australia in the competition. 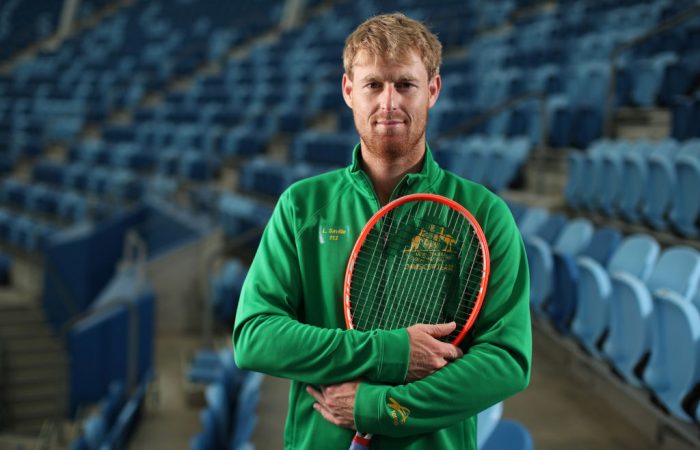 As a young boy honing his skills in South Australia, one dream drove Luke Saville above all others – the chance to represent Australia in Davis Cup.

At age 28, Saville has earned that opportunity for this weekend’s Davis Cup qualifier against Hungary at Ken Rosewall Arena in Sydney.

He becomes the 113th player to represent Australia in Davis Cup.

“I’ve looked up to a lot of these guys, or my team mates, for many years. Making my debut is a dream come true,” said Saville, who received his coveted gold jacket from Australian great Ken Rosewall.

“(There’s) such a rich tradition and history of Davis Cup here in Australia and to finally get the number and play alongside great mates and great players that I idolise, it’s really going to be a great experience.”

A Davis Cup appearance might have occurred earlier for Saville, who climbed to a career-high world No.23 doubles ranking last November.

Team captain Lleyton Hewitt explained that Saville was invited to represent Australia at the 2021 Davis Cup Finals in Italy, but the timing clashed with his wedding to fellow player Daria Gavrilova. “Dasha wouldn’t have been happy with that,” Hewitt smiled.

After successfully teaming with John Peers for Australia at the ATP Cup in Sydney earlier this season, Saville became an obvious choice for this weekend’s qualifier.

“I just know Sav’, as a young kid, he’d always dreamt of one day playing Davis Cup for Australia. It’s his number one goal in tennis,” said Hewitt.

“He’s worked extremely hard at his doubles craft now to give himself this opportunity and I was awfully impressed with the way that he and Peersy played together at the ATP Cup.

“They gelled really well together, they beat good pairs and we’re playing in the same arena that they played at, so I was impressed (with) how sharp he was and he’s fully earnt this.”

Saville is in fact no stranger to the Davis Cup setting, having successfully represented Australia in the victorious Junior Davis Cup team in 2009.

Despite the decade-plus wait for a senior call-up, Saville maintained his focus on his Davis Cup objective. “I pride myself on my hard work, keep my head down, getting better every single day,” he commented.

As he prepares to take on Hungary’s Marton Fucsovics and Fabian Marozsan alongside Peers in Saturday’s doubles rubber, Saville’s work ethic is stronger than ever.

“Now it’s time to put in the hard work and go out there and leave it all out there for Australia, which I know I’ll do,” said Saville.

“I loved playing ATP Cup with Peersy. He’s been at this level for many, many years now, our top doubles player here in Australia, so to play with him and look up to him and basically just learn is amazing.”

Peers, now a veteran of 14 ties for Australia, equally relishes the challenge against Hungary.

“Every time we play Davis Cup it’s always high stakes, no matter what stage you’re at. I know we’re ready and raring to go and we believe in the team we’ve got,” said the 32-year—old.

“We can have a really big push this year. We’re all fighting fit and excited to be back in Australia and ready to go.”