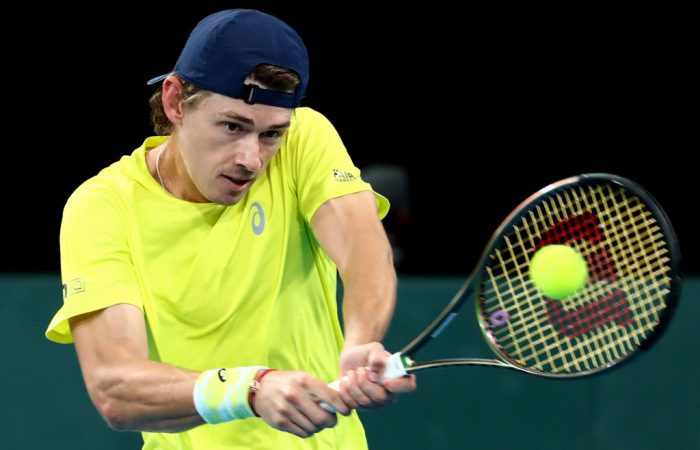 Alex de Minaur has earned Australia a critical first point in the Davis Cup qualifier against Hungary with a 7-5 6-2 win over Zsombor Piros.

It adds to De Minaur’s growing record while competing for Australia – now a winner of six of his past seven singles rubbers, the 23-year-old’s only Davis Cup loss in the past three seasons is to Marin Cilic in the round-robin stage of the 2021 Finals.

“It’s never easy playing for your country. There’s always a lot more nerves going in but I can’t tell you how good it feels to play in (front of) a home crowd, in my home town,” said a delighted De Minaur.

Off to a FLYING start 🚀@alexdeminaur secures the first rubber 7-5 6-2 over Hungary's Piros.
#GoAussies • @DavisCup pic.twitter.com/Ug06dRVffJ

Despite a significant rankings gap, the world No.30 De Minaur faced a tough opponent in Piros, who currently sits at a career-high No.240.

The 22-year-old Hungarian has played his best tennis in Davis Cup, claiming upset wins over Marin Cilic and John Millman in the Finals last year.

There were signs that Piros could claim another career-defining win in the team competition, as games remained on serve for the majority of a tight first set.

But as Piros served at 5-6, a loose game provided De Minaur with three set point opportunities. With a double fault from Piros, the Australian secured the set in 44 minutes.

The determined De Minaur was better able to utilise his Davis Cup experience early in the second set, gaining a decisive break in the fourth game.

He maintained pressure to seize victory with a forehand winner on his third match point.

“It’s special.” said De Minaur of his passion to compete in the world team event.

“To wear the green and gold in front of legends of the sport, with the history, culture and tradition that the Australian Davis Cup team has … it’s just a special feeling for sure.”

Thrilled to return to a favourite court at Ken Rosewall Arena, De Minaur was even more delighted to compete before the legend himself.

“As much as I love playing on this court, this is your court Kenny and it’s my favourite court in the world,” said De Minaur as Rosewall watched on from the front row.

“Thank you so much for being here, everything you’ve done. To keep getting us fired up for Davis Cup in many more years to come.”

Thanasi Kokkinakis now takes to the court against No.1 Hungarian Marton Fucsovics.

With victory this weekend, Australia would progress to the Davis Cup Finals for a third straight time.