With wins from No.1 players Alex de Minaur and Marton Fucsovics in the Davis Cup qualifier, Australia and Hungary are tied at 1-1 after the opening day. 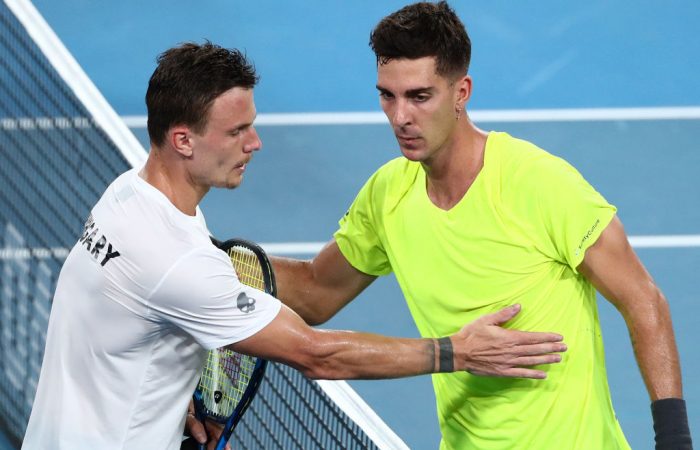 Australia and Hungary are tied at one win apiece in the Davis Cup qualifier at Ken Rosewall Arena, after day one victories from each nation’s respective No.1s.

Alex de Minaur opened play with a decisive win over Zsombor Piros to provide Australia with a 1-0 advantage, before Marton Fucsovics levelled for Hungary with victory over Thanasi Kokkinakis.

“It was a very physical match,” said Fucsovics, noting the difficult conditions created by high humidity in Sydney.

Despite the 64 rankings places that separate the two players – Fucsovics is currently ranked world No.35, while Kokkinakis is No.99 – the high-quality contest was mostly evenly matched throughout.

After trailing 2-5 in the first set, the Australian battled back to force a tiebreak. And while the Hungarian was able to secure the tight 65-minute opener, Kokkinakis’ five break point opportunities hinted at a turning point.

It came as Kokkinakis gained a break early in the second set and consolidated to lead 3-0. With another break of serve secured four games later, the Australian levelled by claiming the 33-minute second set.

In the sapping humidity, momentum was clearly changeable and the 30-year-old Fucsovics utilised all the experience gained in 21 Davis Cup ties contested over 11 seasons

An off-court break after the second set disrupted Kokkinakis’ rhythm, with Fucsovics taking a 3-0 lead in the deciding set.

Kokkinakis staged a mini recovery after receiving medical treatment, claiming a break of serve in the fifth game.

He couldn’t consolidate, Fucsovics converting his third break point of the total five accumulated to take a 4-2 lead. While Kokkinakis continued to battle, Fucsovics maintained his lead to level the tie.

“Thanasi was playing very good in the second set. He raised a level. He was serving very well and he was hitting big forehands,” said the Hungarian, noting the benefit of his off-court break.

“I broke his rhythm a little bit. I came back with a lot of energy and that was the key.”

It sets the scene for a big day two at Ken Rosewall Arena, with John Peers and Davis Cup debutante Luke Saville to open play against Fucsovics and Fabian Marozsan in the doubles match.

De Minaur will then return to the court to face Fucsovics, which could provide an opportunity to secure victory.

“I hope to play a good match against Alex, I’m sure it will be very physical,” Fucsovics said.

“I know him very well. He’s one of the strongest guys on the tour. I just want to enjoy and play a good match.”