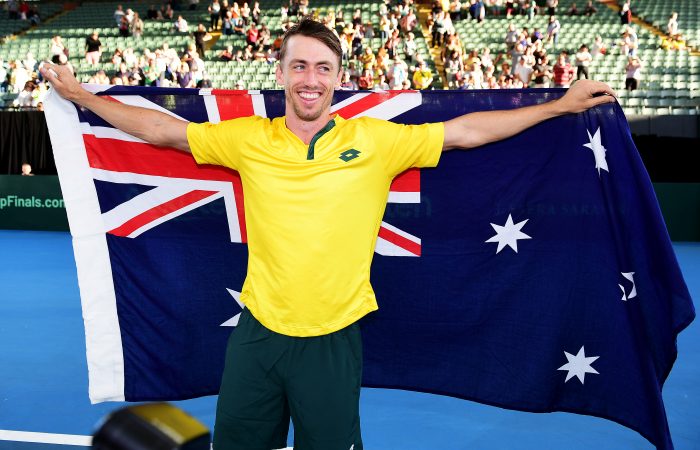 Australia will look to write another chapter in its rich Davis Cup history when the 2021 finals get underway in Italy today.

It has been 20 months since Australia qualified for the finals, with the 2020 campaign postponed due to the COVID-19 pandemic.

Australia defeated Brazil 3-1 in Adelaide in March 2020 to secure their spot in the finals, with John Millman winning two marathon matches to guide his country home.

Team captain Lleyton Hewitt still has Millman’s heroics fresh in his mind as he prepares his team for the 2021 finals.

“John gave us the chance to play in this Davis Cup Final with what he did in Adelaide,” Hewitt said.

“To sit courtside and watch him go through the pain barrier, it was something pretty special. John really bleeds green and gold. He’s a fantastic team man as well and the boys love having him around.”

The 2021 Davis Cup by Rakuten Finals feature 18 nations. The draw is broken into six groups of three, with the top team from each group, plus the two second-placed teams with the best records, progressing to the quarterfinals.

Australia has been drawn in Group D, where it will face Croatia and Hungary at Pala Alpitour Arena in Turin, Italy.

Group E, which features Italy, USA and Colombia, will also be played in Turin. The winner of that group plays the winner of Australia’s group in the quarterfinals.

“The leader of the team Marin Cilic is a Grand Slam champion, so we won’t be taking anything for granted,” Hewitt said.

“He’s back playing really well again and played well on the indoor surfaces in Europe.”

Croatia also has a formidable doubles combination, with Mate Pavic and Nikola Mektic ranked No.1 in the world. This match up will take a lot of Australia’s focus in the build-up.

“They’ve got the No.1 doubles team in the world, who won the recent Olympic games gold medal,” Hewitt said.

“We’ve got to try and work out the best possible combinations for doubles, as well as singles. The doubles will certainly take up a lot of our team focus.”

“We’re ready to go after it, take it to our opponents and try to go all the way.”

Alex de Minaur is ready to lead the Aussie charge at this week’s @DavisCupFinals 💪#GoAussies https://t.co/mf06s7S8vu

Australia’s other opponent Hungary qualified for the finals with a 3-2 win over a talented Belgium team.

“Hungary get the opportunity to play in the Davis Cup Finals for the first time. They are really led by their No.1 player Martin Fucsovics who’s very talented and an incredible athlete. He plays well on these surfaces, so we have to be very wary of him,” Hewitt said.

“Alex (De Minaur) is going to get the chance to take on some incredible players in the No.1 slot.”

De Minaur will be supported by Millman, as well as young star Alexei Popyrin, Grand Slam doubles champion John Peers and Alex Bolt, who got a late call-up to replace Jordan Thompson.

“I know the boys have worked together and there is a lot of Australian coaches who have helped the guys on the road. I’m very fortunate that all the boys in our Davis Cup squad stick together, they are a tight-knit group who train together a lot,” Hewitt said.

“They also do outside activities like golf and hang out together, so that certainly helps when we all come together for the Davis Cup team.”

The Australian team is excited to wear the green and gold at this week’s @DavisCupFinals in Europe. #GoAussies https://t.co/nbarLNTK9W

For Hewitt, the challenge this week is about keeping the players fresh and sharp after a long and gruelling 2021 campaign.

“It’s been a long year for the boys, so really it’s about getting them mentally and physically ready to compete and lay it all out on the line for Australia,” Hewitt said.

> Australia’s tie with Croatia begins Friday at 2am AEDT and will be broadcast live on 9Gem.