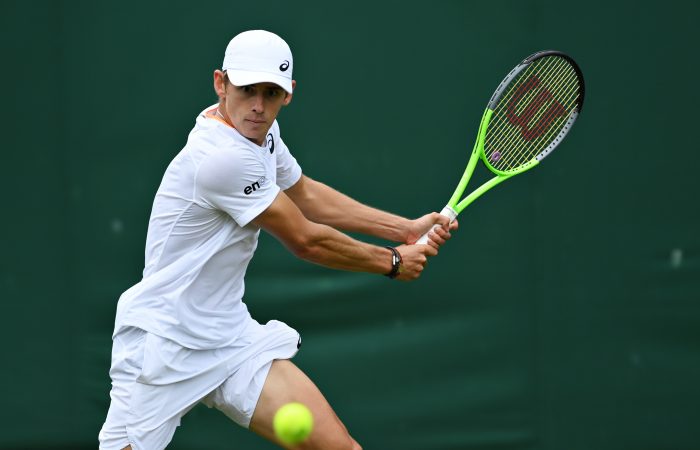 Alex de Minaur is back in action at Wimbledon today, turning his attention to the gentlemen’s doubles competition.

With seven Australians also featuring in second-round singles matches today, it takes the total of Aussies in action to 12.

Seven teams with Australian players will contest the mixed doubles competition, which begins later this week.

Alex de Minaur (AUS)/Matt Reid (AUS) v [WC] Luke Johnson (GBR)/Anton Matusevich (GBR)
Gentlemen’s doubles, first round, Court 10, first match (from 8pm AEST)
Close friends De Minaur and Reid are also a formidable doubles combination, having made the second round at four of the five Grand Slams they have previously played together. Both are in impressive grass-court form too. Reid, a 30-year-old ranked No.90, won consecutive ATP Challenger doubles title in the past month, while 22-year-old De Minaur, who is ranked No.68 in doubles, recently won his fifth ATP singles title.

Arina Rodionova (AUS)/Zarina Diyas (KAZ) v [2] Timea Babos (HUN)/Kristina Mladenovic (FRA)
Ladies’ doubles, first round, Court 15, first match (from 8pm AEST)
Rodionova and Diyas, who are contesting their second Grand Slam tournament as a team, face the reunited combination of Babos and Mladenovic. The No.2 seeds, who have shared four major titles and were finalists at Wimbledon 2014, are playing their first match together this year. This is 31-year-old Rodionova’s eighth appearance in a Wimbledon doubles draw, where she has a 5-2 win-loss record in first-round matches.

Matthew Ebden (AUS)/John-Patrick Smith (AUS) v [12] Tim Puetz (GER)/Michael Venus (NZL)
Gentlemen’s doubles, first round, Court 7, second match
Aussie duo Ebden and Smith have made five tour-level quarterfinals so far in 2021, including at the Australian Open.  Ebden, who is ranked No.70, and Smith, ranked No.73, were also finalists at the recent ATP Challenger in Nottingham. Their No.12-seeded opponents are a new team, who made the Halle semifinals in their debut. This is 33-year-old Ebden’s seventh Wimbledon appearance, while 32-year-old Smith is making his sixth.

Note: After inclement weather impacted the schedule on the opening days of the tournament, gentlemen’s doubles matches have been shortened from best-of-five to a best-of-three set format for the opening two rounds.