Australian Alex Bolt receives a coveted Wimbledon main draw wildcard after his efforts at an ATP Challenger event in Nottingham this week. 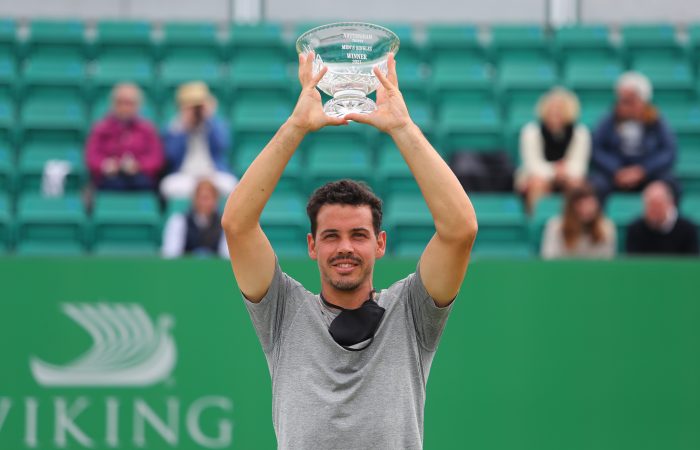 The 28-year-old fought back from an early deficit and navigated rain delays to overcome world No.112 Kamil Majchrzak of Poland in the Nottingham final. Bolt served 12 aces in his 4-6 6-4 6-3 victory.

It caps a stellar week for Bolt, who had entered the tournament on a nine-match losing streak. He won seven matches after coming through qualifying and has been rewarded with a coveted Wimbledon main draw wildcard.

“The European trip for me hasn’t gone to plan. Before this week, I haven’t won a match since February. It means everything to win here and to get the Wimbledon wildcard is just unbelievable,” Bolt said.

“Once I got the first win, the confidence came back into my game and it just got stronger and stronger as the tournament went on.”

It will be Bolt’s second main draw appearance at Wimbledon, having previously qualified in 2018.

World No.64 Alison Van Uytvanck proved too strong for Australia’s Arina Rodionova in the women’s singles final, scoring a 6-0 6-4 victory.

It snapped a six-match winning streak for the 31-year-old Rodionova, who had advanced to the biggest singles final of her career this week as a qualifier.

French duo Pierre-Hugues Herbert and Nicolas Mahut claimed the doubles title at an ATP 500 tournament at Queen’s Club this week, ending the winning run of Australian John Peers and American Reilly Opelka in the final.

It was a third finals appearance at the London tournament for the 32-year-old Peers, who had previously finished runner-up in 2014 and won the title in 2018.

Peers and Opelka had advanced to the final with a 7-6(3) 6-3 victory over Australian Alex de Minaur and Brit Cameron Norrie earlier in the day from their rain-delayed semifinal.

The 25-year-old Australian and Tunisian partner Ons Jabeur were beaten in the final of a WTA 250 tournament in Birmingham.

James Duckworth has qualified for an ATP 250 tournament in Eastbourne, winning his second straight-sets match in as many days.

The 29-year-old Australian’s first-round opponent is compatriot Max Purcell, who snared a lucky loser spot after his three-set loss to No.3 seed Ilya Ivashka in the final qualifying round. It is the 23-year-old Purcell’s fourth career appearance in a singles main draw at tour-level.

Australia’s Jordan Thompson has made a winning start at an ATP 250 tournament in Mallorca this week.

The 27-year-old scored a 2-6 7-6(4) 6-2 opening-round victory against Spanish veteran Pablo Andujar, avenging a loss to the 35-year-old from last month.

Thompson, who served 14 aces in the two-hour and 25-minute match, was forced to dig deep and saved a match point in the second set. He faces either eighth-seed Serbian Dusan Lajovic or Slovak qualifier Lukas Klein in the second round.