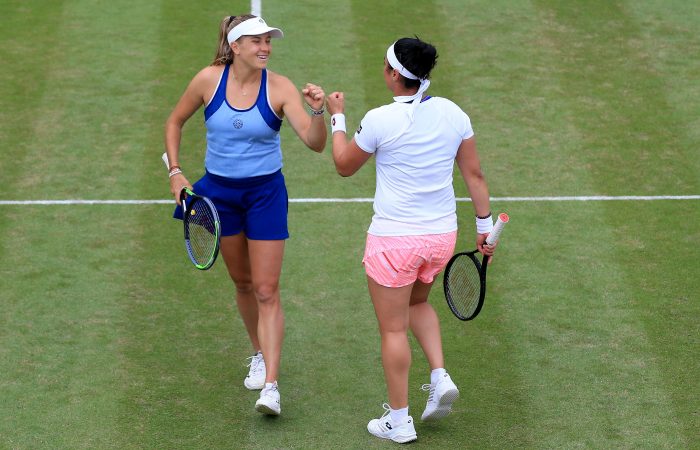 Australian Ellen Perez is through to the doubles final at this week’s WTA 250 tournament in Birmingham.

Perez and Tunisian partner Ons Jabeur recovered from a 3-6 0-5 deficit to defeat top seeds Hsieh Su-Wei and Elise Mertens in the semifinals. Their 3-6 7-5 [10-3] win sets up a final showdown with Czechs Marie Bouzkova and Lucie Hradecka.

It is Perez’s third WTA-level doubles final of the season. The 25-year-old won the Guadalajara title with fellow Australian Astra Sharma in March and was also a finalist at Charleston alongside Storm Sanders.

Arina Rodionova is having a stellar week at an ITF tournament in Nottingham, where she has qualified for her first singles final since October 2019.

The 31-year-old qualifier has won six matches to advance to the final, where she’ll meet top-seeded Belgian Alison Van Uytvanck. Rodionova booked her spot in the final when Bulgarian and former Wimbledon semifinalist Tsvetana Pironkova retired after the first set of their semifinal.

This is the biggest singles final of Rodionova’s career, who is aiming to win her first title since April 2018.

Alex Bolt will feature in the ATP Challenger singles final in Nottingham, with the 28-year-old Australian scoring a straight-sets win against American Mackenzie McDonald in the semifinals.

Bolt entered this tournament on a nine-match losing streak, but has returned to form in impressive fashion. The world No.195 has won six matches this week, including victory against world No.54 and top seed Richard Gasquet in the quarterfinals. He now faces Poland’s Kamil Majchrzak for the title.

It is Bolt’s first finals appearance since February last year.

It is Reid’s fourth ATP Challenger doubles title of the season and a third for Polmans.

Back-to-back on the grass 🌱

One week after lifting the 🏆 with Ken Skupski, @MattReid12345 adds another Nottingham title with @marcpolmans.

Four titles with four different partners in 2021 for the 🇦🇺. pic.twitter.com/b9miDfJPV6

Three Australians are through to the final qualifying round in Eastbourne, where an ATP 250 tournament and WTA 500 event are being played.

Max Purcell upset former Wimbledon finalist Kevin Anderson in a three-set battle. It is one of the biggest singles wins of the 23-year-old’s career.